US Open 2012: Li Na storms to a 6-2 6-3 victory over British No1 Heather Watson in the first round at Flushing Meadows 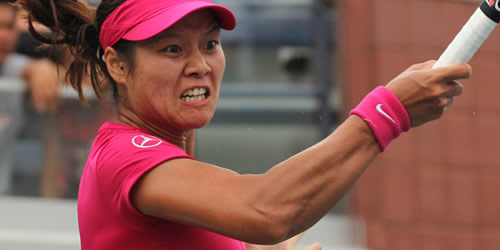 Li Na stormed to a 6-2 6-3 victory over the British No1 Photo: Marianne Bevis

British No1 Heather Watson has not had the best of fortune when it comes to draws on the big stages of women’s tennis.

At this year’s Australian Open, she found herself facing the world No3 and eventual champion, Victoria Azarenka, in the first round, and was hammered off the court before she really clicked into gear.

Having beaten seeds 25 and 48 at Miami, she faced Azarenka again.

At Wimbledon, it seed No3 Agnieszka Radwanska in the third round and at the Olympics, seed 15, Maria Kirilenko, in the second.

The US Open has proved to be the worst of all. Now ranked 71, she again picked up one of the strong contenders for the title here, world No8 Na Li.

The Chinese woman shone in 2011, reaching the final at the Australian Open and then winning her first Grand Slam at Roland Garros. But although she had put together some solid results in 2012—a string of quarterfinals and then runner-up in Rome—she had not shone quite so brightly since. Until this month.

Li reached the final in Montreal and went on to win her first title since Paris last year at Cincinnati. And when Li hits her form, her flat, crisp, angled ground strokes simply zip through the court.

So Watson found herself on the big stage—Court 17—in the first match on the first day the US Open playing a truly challenging opponent. Even so, she might have viewed it as a modest test compared with last year. In New York in 2011, she faced a still more daunting prospect, for her luck of the draw—or lack of it—had placed her in the first round on the first day against Maria Sharapova, and that meant the towering Arthur Ashe.

She was not, however, overawed by the occasion. Still a teenager, Watson captured the hearts of the crowd as she took the attack to the former champion, taking the first set 6-3 and promptly breaking Sharapova in the first game of the second. This was not how the world No102, in her first US Open main draw, played.

So on a hot, humid and overcast morning, show court 17 was at near capacity, expecting, perhaps, more of the same from the feisty, nimble British woman, and she did indeed threaten to repeat the performance when she earned the first break point in the fifth game.

Li, though, survived three deuces, held, and promptly earned two break points of her own, taking the second for a 4-2 lead.

It was clear that Li had brought her Cincinnati form with her, and her serve and baseline game were sharp and near faultless. She held to love and broke once more—with one of many inch-perfect angled cross-court backhands—to take the set 6-2.

In fact, Watson was not playing at all badly: She stayed aggressive and made no more unforced errors than Li—they were nine apiece. But the superior Li firepower earned her 12 winners to Watson’s four.

The British woman was not fazed, though. Helped by a couple of aces, she held her opening service game, but Li looked full of confidence too. She held with a beautifully executed swing backhand volley and set about pressuring the Watson serve. The young Brit produced another timely ace at deuce and held, and then turned the tables on Li to go 40-0 up for three break points. It took her all three attempts but she converted the last to lead 3-1.

The advantage did not last long, and an increasingly aggressive Li—happy to venture to the net as necessary—worked the break back, held to love and, with thunder and gun-metal grey clouds rumbling overhead, clearly wanted to close things out quickly. She broke again, and Watson found herself serving to stay in the match at 3-5 down just as the clouds did their worse.

Rain of near-tropical proportions drenched the stadium for the better part of an hour, but it made little difference to the outcome. Li fired off a couple more piercing backhands to lead 40-0 and a netted backhand from Watson drew the line, 6-3.

Again, there was little to choose between them on errors, but again, Li outhit Watson on winners, 16 to six.

The 20-year-old will live to fight another day—and hope that next time she gets a happier break in the draw. But she had no regrets about her performance:

“I’m happy with how I played. I even feel I played better today than I did against Maria last year. Today I felt Na was on another level—winners off balls I didn’t think you could hit winners off… She just played better tennis, like a Grand Slam champion.”

She went on: “I enjoyed playing against her—I think it was a high-quality match.” As for the rest of the year, she beamed that famous smile: “Top 50 is my goal!”

Meanwhile, Li is the first to throw down the gauntlet in a high-power quarter.

The Chinese woman’s possible fourth-round opponent did much the same. Defending champion, Sam Stosur, has kept a low profile amid talk of the chances of Serena Williams, Maria Sharapova and Victoria Azarenka, but she hit 10 aces and 22 winners in just 51 minutes to record a resounding 6-1, 6-1 win over the 64-ranked Petra Martic.

However, two other promising seeds in her quarter—the upper ‘Azarenka’ section—fell. No16 Sabine Lisicki lost in three sets while fellow German, No18 Julia Goerges, went out in straight sets.

US Open 2012: Andy Murray into second round after early hiccup