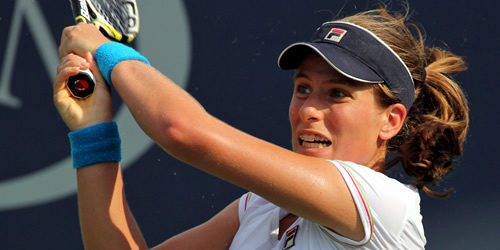 Johanna Konta had already made a name for herself here in New York, striding through three qualifying rounds and then winning her first career Grand Slam match to progress to the second round of the US Open.

But what has impressed about this young woman, growing accustomed to finally playing under the British flag after years of calling the UK her home, has been her maturity—as though she has been on the big stage for years rather than months.

For although she is 21, she has yet to break the top 200—though her run here will ensure she does—and to date, she has played just four WTA matches.

She assured the waiting media, after winning that first match in a Major: “To be honest, I actually feel kind of normal, as I would hope to. I feel like I’ve matured since Wimbledon…I’m definitely growing as a player. I think I got a lot of that initial nervousness out of the way there. So I feel much more prepared here.”

Having already beaten the 59-ranked Hungarian, Timea Babos, 6-2, 7-5, she next faced the 67-ranked Olga Govortsova, who put out No29 seed, Tamira Paszek in straight sets. The tall woman from Belarus has been as high as 35 but she had not gone beyond the second round in five previous US Open appearances.

It proved to be a harder contest than the first round. Konta got off to a great start, 4-0, with the same aggressive style that had got her this far, and she closed out the opening set 6-2. But she was broken in the fourth game of the second set as Govortsova got into her stride. The Belarus woman has a big forehand delivered from a 6ft body, and although Konta broke back in the seventh, she was in turn broken to bring Govortsova level, 6-2.

Now with strapping added to her left thigh, Konta regained some momentum, and broke in the first game of the final set, held, and broke again to take a 3-0 lead.

Govortsova had to up her game, and she did. Her forehand began to pepper winners to each back corner, she broke back with a lovely volley finish from a cat-and-mouse exchange, and then held. She very nearly broke again, pushing Konta to deuce in the sixth, but the British woman stayed the aggressor and took a 4-2, and then a 5-2 lead with another break.

She looked set to join Robson in Round 3: All she had to do was serve it out. But Govortsova’s forehand broke through down both lines to devastating effect and she broke not once, not twice, but three times to take the set and match, 7-5.

Konta was quick to recognise that it was Govortsova who won the match with a higher level of play rather than Konta losing it, and she was right in her assessment. She made only three errors in the final set—the same as her opponent—and converted all three break chances she had.

The same maturity carried her through her post-match press obligations, too.

“Lot of positives from this tournament for me. I believe she raised her level and I, unfortunately, didn’t. I wasn’t moving as well as I would have liked or serving as well as I would have liked. But credit to her. She played a very solid five games from 5-2…she made very few errors in those five games, and I have to improve from every match, win or lose.”

“I had three tough rounds in the qualies and this was my first qualifying event ever. So I do think I’m moving in the right direction and I am picking up on things quite quickly.”

She certainly is. The strides she has made in a matter of months suggest there is a lot more to come, and with the distraction of her naturalisation as a Briton out of the way, she is clearly buoyed up by the prospect of greater national support.

“I was still quite new at Wimbledon. I had a lot of people there, but I think because I was newer there, no-one really knew who I was. But the more I play with GBR next to my name, the more consistent support I’ll get as people find out about me—hopefully.”

So now it’s more tournaments through the remaining season with the aim of heading to Australia in the New Year: “I haven’t played many WTA events, and only two Grand Slams, but the more I play, the more I will feel comfortable—I very much do enjoy the stage, and look forward to playing [at the Australian Open]…I haven’t many points to defend so that can only help me get as close to the main draw as possible.”

And she will undoubtedly have the British crowd right behind her.