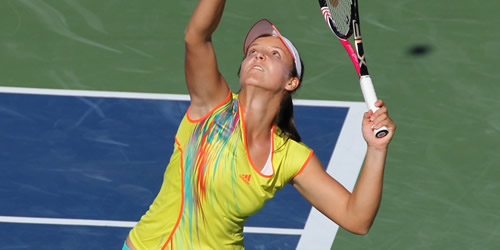 Kim Clijsters was asked about her second-round opponent, Laura Robson, after comprehensively beating another teenager in her opening match.

With her usual affable generosity, she saw all the positives in a young woman about whom there has been a buzz—especially in Great Britain—since she made her first appearance on the big home stage of Wimbledon as a 15-year-old in 2009.

Back then, she was a wild card ranked 488, but she took the first set off No32 seed Daniela Hantuchova and went on to try her hand at qualifying for the US Open. She won two matches but lost in a tight three-setter in the third.

It was a near identical story in 2010 but then, last year, she made it through qualifying and went one more stage to Round 2. It made her, compared with the first round opponents of her and Clijsters this year, a veteran of the US Open.

So Clijsters paid her due respect: “She’s a great ball striker. When she’s behind the ball, she hits the ball so clean and has a very good eye for the ball as well. So it’s going to be very important to be going for the lines and to try to get her out of her comfort zone a little bit.”

But in Clijsters, the improving, developing Robson faced one of the best CVs that Flushing Meadows had to offer. The Belgian mother reached the final of her last four US Opens, winning the title in the last three: 2005, 2009 and 2010, plus the final in 2003. Her win over Victoria Duval on opening night took her to 21 straight victories here, and the best winning percentage of any female player, 24 wins to three losses.

Robson was as pragmatic and clear-sighted as it’s possible to be in the face of such a story, such a champion, who would retire from tennis whenever she played her last match.

“It’s going to be [emotional] no matter who she’s playing. You can’t really think about that. Playing against Clijsters at the US Open, I’ve got nothing to lose and I’m just going to try to play as well as I can.”

Well Robson did just that, in a glowing, warm New York afternoon, the kind of afternoon when the colours sing and the crowds chill. When she and Clijsters walked into the huge arena that is Arthur Ashe, the crowd was still modest in size but, with the passing minutes and the dramatically unfolding drama of this tournament’s sweetheart, the seats filled.

On her first service game, Robson immediately showed her mettle by resisting a break point but Clijsters stood by her own words and, in the fourth, she fired a winning forehand down the line to break and lead 3-1.

Robson also kept to her plan, staying with Clijsters in many of the baseline rallies and serving beautifully. They moved on to 5-3 and the script dictated that Clijsters, whose forehand was finding its mark just inside the lines time and again, would serve out the set—but Robson was just warming to her task. Her left-handed forehand earned two break points and a third, hammered across court to Clijsters’ backhand wing, did the job.

It looked as though the break back had been in vain: at 5-6, Robson faced two more break points as Clijsters upped her attack, but the Briton came up with some great serves. If Robson needed a confidence boost—though there was no evidence that she did—this game surely gave it to her. Six deuces and another set point came and went but she held to take it to a tie-breaker, and there too, she played Clijsters at her own game.

Still Robson’s serve performed well: She was regularly hitting at 110mph plus which, leftie to rightie, would have beaten a woman less flexible than Clijsters.

But the difference, as they reached the sharp end of the tie-break, was the return of serve. A forehand return winner levelled the points at 4-4 and a backhand down the line made it 5-4. Clijsters, though, netted the Robson delivery at 4-6 and could barely touch the last: It was first blood to Robson after an hour of high-quality, high-pace tennis.

The opening of the second set followed the same pattern. Clijsters took advantage of two double faults in the third game to break, but an athletic fourth game ended with a break back to Robson—courtesy of another big return of serve.

Yet again, Robson showed great self-confidence in holding off two more break points in the sixth and Clijsters, not to be outdone, did just the same. The rallies got longer, the balls deeper, but now with a few drop shots thrown in. Robson still served, deliberately and strongly, to reach 5-4; Clijsters did the same.

Robson faced one more break point after netting a nervous overhead but she righted the ship with an ace and, in the very next game, made a touch volley winner to earn herself two break points. These were match points, and by now the crowd was bigger, louder, and equally balanced in their support. Clijsters, champion that she is, levelled and it went to a second tie-break. Surely now Clijsters would dominate and Robson succumb?

Not a bit of it. There was no more than a single point between them through 10 points, and precious few unforced errors. Who would blink first?

In the event, neither blinked. Just as in the first tie-break, it was the Robson return of serve—a forehand down the line winner—that gave her another match point, and a final big serve drew one last error from Clijsters’ racket.

It took a moment for the penny to drop—that this was last ball the sunny Belgian woman would hit in a singles match.

She has been quick to remind all who would listen that she is not done yet: She has signed up to play both women’s doubles with fellow Belgian Kirsten Flipkens and mixed doubles with Bob Bryan. She wants to make the very most of her very last time at Flushing Meadows, in her very last Grand Slam. She explained why:

“I’ve always been inspired here by the energy on court…it just felt like the right place to retire. I just wish it wasn’t today!”

By the time she reached the waiting press, she had put the usual frustration of losing the match to bed: There was no need of post-match analysis. Instead, she was now, quite simply…
“…happy. You know, I’m happy that in the last year and a half, it’s been kind of up and down, and I’m happy that I stuck through it and I was able to kind of live a lot of these emotions that I’ve had in these 18 months or so. Kind of in a way proud of myself that I was able to do that. So, yeah, I feel happy.”

But the last word must go to the young woman who, for the third year in a row, has taken another step forward at this tournament, her first Grand Slam third round.

Robson’s tennis here, today, was some of her best: a highly focused, attacking and mature game that felt like a step up in her development.

She agreed: “I think every match that I play against a tough opponent, like Sharapova, I get more experience from it and I learn a lot…I think previously I just sort of slipped up a little bit in the key moments…today I managed to stick with it.”

She will need to take her experience against Clijsters into her next match, too, an equally daunting task against No9 Na Li. Last year’s French Open champion has hit her best form through the US Open Series—at just the right time.

Marooned on Arthur Ashe after the biggest win of her career, Pam Shriver put Robson on the spot not once, but twice. What did Laura want to say to the woman she had just beaten? The words were nicely chosen:
“Thanks to Kim for being such a role model to me over the years.”

Then Shriver asked how she had managed play such a wonderful match. Suddenly the assured and confident player of 10 minutes before reverted to the teenager she is. Her quietly-spoken response was simple: “I just worked my butt off!”