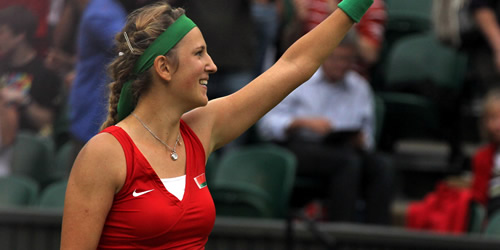 Despite her consecutive losses to Serena Williams in the semis of Wimbledon and the Olympics, Victoria Azarenka’s consistency since she opened 2012 with four straight titles saw her regain the No1 ranking in time to earn the top seeding for the US Open.

Agnieszka Radwanska, who rose steadily through 2012 to a career high No2 this July, takes the second spot. The Pole, though, withdrew from New Haven this week with a shoulder injury.

Maria Sharapova, who briefly took the No1 ranking along with her win at the French Open this year, is seeded No3, but she too comes to New York after an extended bout of illness that saw her withdraw from Montreal and Cincinnati.

Three-time US Open champion, as well as Wimbledon champion and winner of Olympic gold this summer, Williams is the No4 seed.

Williams was runner-up in New York last year to Samantha Stosur, who will defend the 2011 title as the No7 seed.

One of the most significant names in the draw is another three-time US Open champion. Kim Clijsters will be the No23 seed in this, her last, US Open appearance.

The twice US champion Venus Williams, though climbing the rankings fast to No47 this week, is the only unseeded former champion in the field. It was here last year that she discovered she had a debilitating condition that has severely affected the last 12 months.

There are three British women inside the top 100 and thus in the main draw, though none is ranked high enough to be seeded. Heather Watson leads the group at 70, followed by Anne Keothavong and Laura Robson at 80 and 91 respectively.

Unfortunately, the woman who has been a direct entry to the main draw of the last two US Opens, Elena Baltacha, will not play this year. She has won only five matches on the main WTA tour this season, three of them during the home grass season, and she revealed at Wimbledon that she needed surgery on an ankle.

Baltacha is one of a clutch of withdrawals that includes Kaia Kanepi, ranked 15, Vera Zvonareva, No16, Flavia Pennetta, 18, and Svetlana Kuznetsova, 48. It means that Jelena Jankovic, despite her ranking of 34, has just made the seedings at 31.

One welcome returner to the draw, though, will be Andrea Petkovic, who has missed most of the season first with a back injury and latterly with an ankle injury. She returned to tournament play last week, but with a current ranking of 43, she will not be seeded.