US Open 2012: Marianne Bevis previews the women's draw at Flushing Meadows, as Serena Williams bids for a fourth title 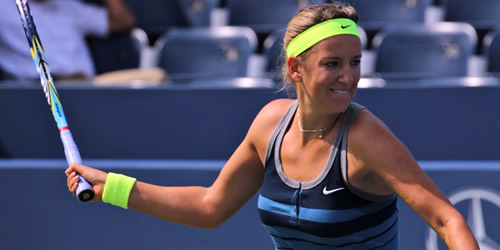 One wonders whether anything could make Serena Williams’ summer of 2012 any better: a fifth Wimbledon title followed by Olympic gold sealed her ‘Golden Slam’, and in between she defended her title in Stanford. She leads the women’s tour with five titles, has the best win-loss record of the year, and has hit the most aces by a mile.

She looks happy, healthy and eager to win her fourth US Open title. And when she looked at the draw, she may have looked even happier.

Of the 10 Grand Slam title winners in the draw, six are in the other half—the Victoria Azarenka half—but that paints only part of the picture.

Azarenka, the reigning Australian Open champion and No1 seed, finds the current French Open champion, Maria Sharapova, in her half, as well as last year’s Wimbledon champion, Petra Kvitova. There is worse.

She shares her heavyweight quarter with the defending US champion, Sam Stosur, with last year’s French Open winner Li Na and with three-time US champion, Kim Clijsters.

Meanwhile, Williams has two former French champions who have struggled to replicate that form: veteran Francesca Schiavone and Ana Ivanovic who, since her 2008 triumph has not gone beyond the fourth round in any Grand Slam.

One other Major winner is in the bottom half of the draw: Serena’s sister Venus, who retired from last year’s US Open with the illness that has knocked her out of the seedings despite some return to form in Cincinnati last week.

With 21 Grand Slam singles titles between them, five won in New York, the two sisters have dominated the Majors since 1999 and still they capture the attention in this year’s US Open draw.

There are names in their half who can, of course, disturb the status quo—just as there are men not called Federer, Djokovic and Murray who can cause an upset in their draw.

Perhaps Azarenka or Sharapova can become the only woman to hold two Majors in a year since Clijsters backed up her US win in 2010 with the Australian title five months later.

Maybe Caroline Wozniacki can finally claim her first Major, or the most consistent riser of the last year, No2 Agnieszka Radwanska. Then there are new women making great strides this year: Angelique Kerber, whose break-through to the New York semis last year heralded more of the same in 2012, or Sara Errani, with a quarter finish in Australia and the final in Paris to her name.

How does the draw pan out for these and the other runners and riders in the last Grand Slam of the year?

Azarenka may not have won a title since her unbroken run to Indian Wells at the start of the year, but that doesn’t mean the No1 seed does not warrant her place at the top of the pile, for she has continued to record excellent results: finals in Stuttgart and Madrid and semis at Wimbledon and the Olympics, taking the bronze medal.

Not so good is that she has Sharapova, who has beat her, and more worryingly, the US champions of the last three years in her quarter. She can only meet one of them—Stosur or Clijsters. Alternatively she could face Li, who has just won her first title since last year’s French Open in Cincinnati, having reached the final in Montreal. But before that, Azarenka has two more big hitters contesting a third-round face-off, Julia Goerges or Sabine Lisicki.

So if the top seed makes it through her quarter—and there is no sign on the practice courts of the knee problem that made her withdraw from her first match in Montreal this month—she will have earned her place and become a strong contender to advance to the final.

As a footnote, ill fortune has placed British hopes Heather Watson and Laura Robson in possibly the most demanding eighth: Watson has Li in the first round, Robson Clijsters in the second, and Stosur lurks in the fourth round should they progress that far.

And another note: This will be Clijsters’ valedictory tournament, and is the place where she has been undefeated in three Opens since she won here in 2005. She did not play in 2006-7 nor last year. There would not be a more popular winner in New York.

After Sharapova won her first French Open on the back of Rome, it looked as though she had hit her top form in time for Wimbledon after a succession of losses in big finals to Azarenka—twice—Radwanksa—in Miami—and Williams in Madrid.

But the 2006 US Open champion was taken out by Lisicki—a potential semi-final opponent here—and left for dead at the Olympics by Williams, a woman she has not beaten since 2004.

The Russian has not played since, laid low with a virus, but she returns to a draw that should hold few problems for her until the later stages—a possible meeting with 2011 Wimbledon champion Petra Kvitova. A win would mark Sharapova’s first time beyond the fourth round since her 2006 title.

Kvitova has to contend with two other big hitters who have won some matches during the US Open Series, Yanina Wickmayer and Marion Bartoli, but Kvitova should be in buoyant mood, coming to Flushing with the Montreal title, a semi finish in Cincinnati and currently in the semis in New Haven, giving her the top spot in US Open Series Bonus Challenge.

The young American Coco Vandeweghe has the dubious honour of opening against Williams and one thing is almost certain: She will do it on the biggest stage in tennis, on Arthur Ashe. But the towering youngster pushed Williams hard in the final of Stanford in July and this could prove to be a useful test for Williams as she embarks on a reasonably good-looking draw.

Williams has a 19-1 win-loss record since the French Open, and has dominated those who lie in her path to the semis: Her fourth-round opponent Maria Kirilenko, 4-0; her quarterfinal possibles, Wozniacki 5-1, and Ivanovic 3-0. It’s worth noting, though, that Ivanovic beat Wozniacki at their last meeting in Indian Wells this year.

Of note in the top eighth, not because they are likely to cause any major upsets later in the draw, is the presence of two of the oldest women in the draw: Francesca Schiavone—at 32 she is about to play her 49th consecutive Grand Slam—and Kimiko Date-Krumm, aged 41.

Looking ahead to Williams’ possible semi match-ups, one fly in the ointment may be Kerber, the fast-improving German who beat Williams in Cincinnati and has risen to a career high this month of No6.

Radwanska, whose unconventional, tactical game has earned her fans and ranking places—she reached a career high No2 this year—broke new ground with her first Grand Slam final at Wimbledon where she put up a sterling fight against Williams, losing out in three sets. But it is hard to see her going one step further to the title in New York, a place where she has never gone beyond the fourth round.

She will not be helped by a shoulder problem—a recurrent issue—that forced her to withdraw from New Haven this week, and possibly explains her straightforward losses at the Olympics and in both the North American Premiers.

Nor is she helped by the draw, which holds, possibly, Jelena Jankovic, who took a set from her in each of their last two matches, in the third round.

The fourth round than throws up Cibulkova, who won her second career title last month at Carlsbad, or Sara Errani, who reached her first Grand Slam final in Paris in the best singles season of her career.

That is always supposing Venus Williams doesn’t find enough stamina to tear through the draw, but she has a mighty task to do so: Her second round opponent is Kerber, who has the most wins on the tour this season, reached the semis in New York last year and backed up her form with the quarters in Paris and semis at Wimbledon. She also defeated Williams in the third round at the Olympics, but it took two tiebreak sets to do so.

Most recently, Kerber reached the finals in Cincinnati but the good news for Radwanska, should they meet in the quarters, is that the Pole beat Kerber at Wimbledon—some compensation for losing to her here last year.

As a further aside, Kerber’s first opponent is British No2, Anne Keothavong.