Marianne Bevis looks back at a memorable 2012 US Open, where Andy Murray claimed his maiden Grand Slam title

It turned into one of the most memorable US Open’s of recent years. The weather may have been familiar, the climax on a third Monday, too. But there were differences.

There was the hole left by former champion Rafael Nadal, missing with injury since Wimbledon, whose on-court presence is so powerful, so energetic, so charismatic that his absence transformed the balance of the draw. It would also, in due course, lead to a change in the rankings as he was supplanted at No3 by Andy Murray.

Then there was the unexpected men’s semi-final line-up, and not because of the presence of No4 seed, David Ferrer: The Spaniard was more than deserving of his place in the last four. But five-time US champion Roger Federer, coming to New York on the back of a Cincinnati win, who had not fallen short of the semis since 2003, went out to a searing performance from the huge Czech force that is Tomas Berdych in the quarters.

On the women’s side, former No1 Caroline Wozniacki, former French Open champion Francesca Schiavone, big German hopes Sabine Lisicki and Julia Goerges, together with six more seeds all fell in the first round.

But there was so much to shout about. And top of the pile…

1. Andy Murray: his first Grand Slam, his second big title of the summer after taking Olympic gold, and the first British man to win a tennis Major since Fred Perry in 1936. New York has always liked him, his intensity, his trials, his work ethic…and 2012 finally brought the unquestioning love from his homeland too—and that was before he won the US crown. Here’s hoping they never question this most deserving, this most unassuming of Grand Slam champions again. 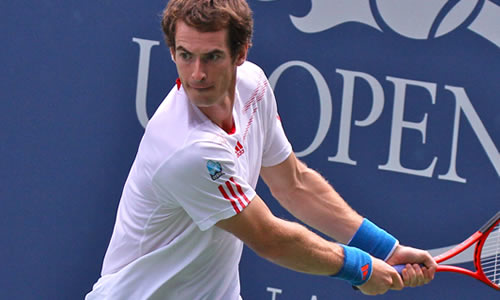 2. Serena Williams showed that she, too, had Scottish-style grit, staying-power and self-belief in coming back from a break down in the final set against the year’s No1 woman, Victoria Azarenka. The top seed had played like a champion—she won the Australian Open this year—fighting back from a set down against Maria Sharapova in the semis and pulling out a great win over defending champion Sam Stosur in a final tiebreak in her quarterfinal. Now she had come back from a set down to Williams to serve for the match. But 13 years after winning her first Grand Slam title, as a teenager on this court, Williams won her fourth US trophy, her 15 Major. And she looks ready for a whole lot more. 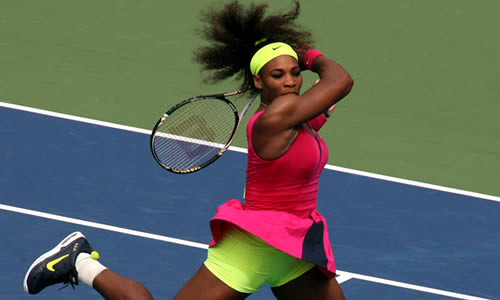 Stunning Serena, as athletic in her 30s as when she won the US Open as a teenager

3. Farewell to a champion: Kim Clijsters had not kept it a secret—this would be her last tournament before retiring from tennis. That did not make the leaving of New York any less emotional. She was runner-up here in 2003, won in 2005 and again in 2009 and 2010, but had not lost a match between that 2003 final and this year. She had missed some years with injury, others with her first ‘retirement’ to start a family. So she could not escape the question in 2012: Would she reconsider leaving tennis under any circumstances? She shook her head, touched her heart and said she knew “here” it was time to go. And go she did, in a doubly memorable moment. 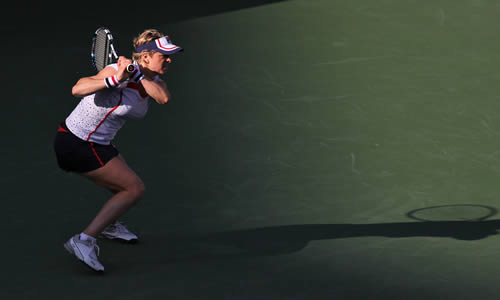 4. Lovely Laura: On the other side of the net for her second match, Clijsters faced British teenager Laura Robson, the youngest woman in the main draw and playing her first US Open without the need to qualify. Her draw was as heart-stopping as could be: After American qualifier Sam Crawford came the prospect of one Grand Slam champion after another. First was Clijsters, earning Robson the showcase Arthur Ashe court for the first time: She won in two tie-breakers. Next was last year’s French Open winner, Na Li: She won that, too, in three. After her came US defending champion Stosur and, should Robson win again, it would be Azarenka in the quarterfinals. In the event, Stosur proved a champion too far, but Robson was tasting stardom—TV crews outside her hotel—like never before. And as she builds on her new career-high ranking of 75, she will have to get used to more of the same. 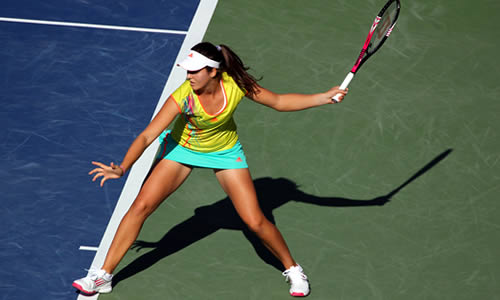 5. New Brit on the block: Johanna Konta, having fought for years for British citizenship, finally got to play for GB this year but had only played three matches, and won one, this year. In her first US Open, she won through three qualifying rounds against higher ranked players and then beat the No59-ranked Timea Babos to reach the second round. Konta won the first set in her next match too, finally succumbing 7-5 in the third. And she, like Robson, has a big, attacking approach to her tennis that will undoubtedly take her higher very quickly. As it is, she jumped from outside the 200 mark to 148 this week. 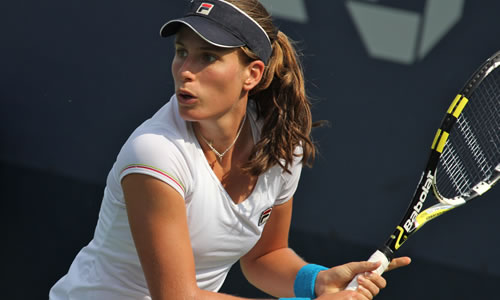 6. Farewell to a champion: Andy Roddick did it very differently from Clijsters, calling a press conference after his first match in New York. He kept it short: “This will be my last tournament.” Playing in his 13th straight Open, he was the last US champion here back in 2003, the year he topped the rankings. Thereafter, he suffered the road-block of Roger Federer, who beat him in each of his other Grand Slam finals, three at Wimbledon and one at the US Open—and in three other Major semis, too. Perhaps one of Roddick’s best memories from his retirement year will therefore be the Miami Masters, where he was twice a champion, and where he beat Federer in the last of their 24 meetings. 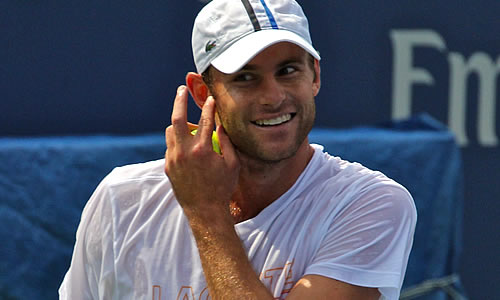 Andy Roddick, former US champion, made his emotional tennis exit with a smile

7. Dynamic duo: American fans had other men to cheer once Roddick bid farewell in the fourth round. Bob and Mike Bryan have played doubles at every US Open since 1995, that’s 18 times. This year, they won their eighth Grand Slam, breaking the Open era record and tying the all-time record for most Major doubles titles—12. The last pair to match them was John Newcombe and Tony Roche in 1976.

8. Bella Italia: Another duo thrilled tennis fans in even more ways. Best friends and doubles partners Sara Errani and Roberta Vinci celebrated their best year together with their first US doubles title, having been runners-up on Australia, winning the French Open and reaching the quarters in Wimbledon. They won six more titles, the most emotional coming in Rome, but that was not the end, as the two surged through the single draw, too. The petite Errani, a transformed player since changing her racket at the start of the year, had already reached the final of the French Open and broken the top-10. But the equally petite Vinci was also enjoying her best ever singles ranking of 18 after her best Grand Slam finish, the fourth round at Wimbledon. Here, she did even better, beating No2 seed Agnieszka Radwanska to reach the quarters—only to meet Errani. Vinci lost to her friend, who then lost to Williams in the semis but, now both at new highs in the rankings, they beamed their radiant smiles all the way to doubles triumph. 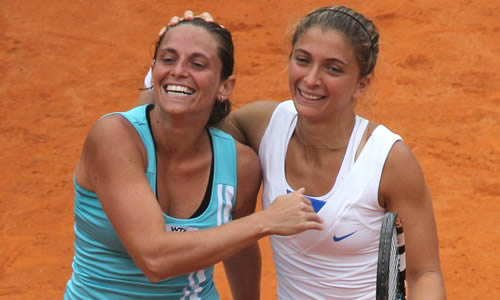 Errani [right] and Vinci, winners in Rome, became the new No1 doubles team after winning in the US

9. Hewitt’s fire and brimstone: How else to describe the passion and effort that marked the battle of the over-30s between Ferrer and Lleyton Hewitt? The Australian former world No1 won the US Open more than a decade ago, aged just 20, took Wimbledon the next year and, in 2004, he was runner-up in New York, but his career became littered with injury and surgery. Since 2008, both hips and feet had been under the knife, but here he was, in his 12th US Open, battling through a gruelling five-setter in the second round to face one of the few men prepared to leave as much sweat and blood on the court as he was. In the end, his lack of 2012 match-play told as he conceded a long first set tie-break, won the second and lost the third. He could not live with Ferrer in the fourth, but few can. It was, though, a match to savour. 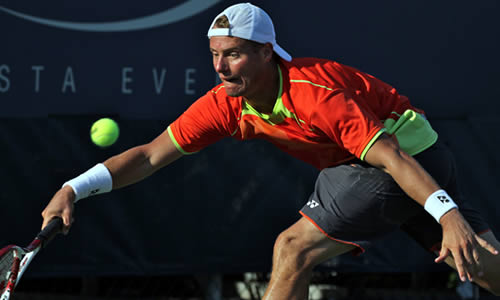 Lleyton Hewitt, a fireball on court and dressed for the part

10 Fighting Ferrer: With the absence of colleague Nadal, Ferrer enjoyed a special status in New York, his own quarter in the draw, and he proved his worth. Having fought off Hewitt, he took down Richard Gasquet in straights. But then came one of the matches of the tournament, his face-off with Janko Tipsarevic. Back-and-forth it swung, a match of such commitment, quality, energy and sportsmanship that it remained irresistible throughout its four-and-a-half hours. First Ferrer led, then Tipsarevic took the second set tiebreaker and the third set. Ferrer came back in the fourth, only to fall behind by a break in the fifth. Yet it ended in another tie-break, Ferrer asserting, just, his marginally higher ranking. The crowd stood in ovation countless times, but Ferrer, always modest, said what everyone knew: “It was one of the best emotional matches of my career…My opponent, he also deserved to win this match.” Perhaps he was right. More likely, Ferrer, playing the best season of his long career, deserved it just a little more. 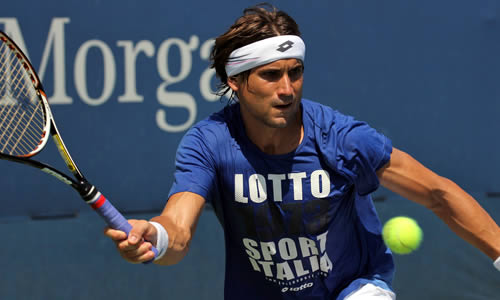 David Ferrer, iron by name and arm, modest by nature, fulfilled his No4 ranking in style
Gossip