Marianne Bevis looks back at Andy Murray's incredible summer, which ended with his first Grand Slam title in New York

The signs were, if not in the stars then in the skies over London and New York.

On one side of the Atlantic, summer gave way to autumn as a nation waved its thanks and its farewells to the Olympic athletes who had filled and thrilled the six weeks of Great Britain’s summer. These were the brave and the bold who had made 2012 not just a royal jubilee year but a people’s jubilee year, and no-one would rain on their parade. Come the evening of 10 September, though, there was an autumn chill in the air, signalling the inevitable transition to a new season.

On the other side of The Pond, evening had yet to come, autumn had yet to arrive. New York’s weather had provided its usual spectacle—tornados, rain-storms, oppressive heat, debilitating humidity—and it had ensured that the biggest tennis tournament in the world, the last Grand Slam of 2012, would once again end later than planned. But this time, it could not have been planned better. This time, the sun was shining on one remaining Briton who had begun his journey back with those Olympic heroes at the end of July.

The first event of London 2012 started on the day after the opening ceremony at the sport’s most iconic venue, Wimbledon. 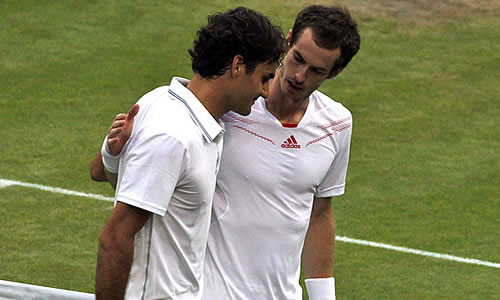 This had been the scene of heartbreak for Andy Murray so many times in his single-minded, muscle-burning pursuit of the Holy Grail. In 2008, he was a quarterfinalist and went on to reach his first Grand Slam final two months later in New York. The next year, he reached the semis on London’s green lawns—now it was just a matter of time.

But two more Grand Slam finals came and went, and two more semi-final losses at Wimbledon. Blocking his way at every turn was a phalanx of tennis royalty—Roger Federer, Novak Djokovic and Rafael Nadal—so despite reaching the last four in five out of six of the Majors leading into Wimbledon 2012, the prize seemed always just out of reach.

But for those who looked, it was becoming clear that Murray’s fingers were reaching a little further, a little closer, with each passing month of 2012. In Australia, it took world No1 Djokovic 290 minutes in five arduous sets to deny Murray a place in the final. At Wimbledon, it took the new No1 Federer more than 200 minutes to pull back from a lost first set to deny Murray the title, but it marked the Briton’s first final at the All England Club and his first set in a Grand Slam final. He saw its significance: Through tears of disappointment, he affirmed “I am getting closer.” And he was lifted on a wave of support from his home crowd like never before.

That support fuelled his growing self-belief, and so did the Olympic roar that followed the opening of London 2012 and accompanied his pursuit of a gold medal instead of a gold cup back on Wimbledon’s lawns.

Never had the traditional, regal home of tennis heard the joy of tennis overflow so freely, its optimism voiced so expressively, its belief in the man who lived almost within hearing distance given to openly.

Murray responded in kind, his memory banks egging him on towards a rematch with Djokovic and a rematch with Federer. This time, he would not be denied: He dropped a set to neither and he won the unofficial “fifth Grand Slam”, Olympic gold. Within hours, he also won a silver in doubles.

There was little time for celebration, and little time to share the Olympic fever with friends and fellow athletes—a big regret as he left home soil to take up the baton in the US. 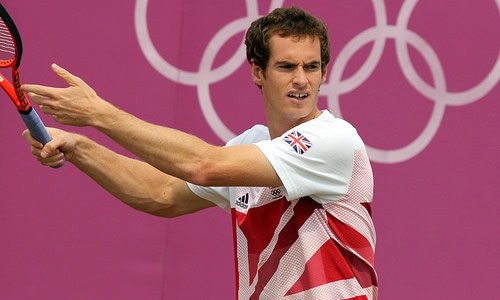 Yet even with gold to his name, he remained one of the most understated men in the US Open draw, avoiding the limelight even more than usual, admitting to dreams of Wimbledon and the Olympics, of success denied and success won.

He had, everyone told him in New York, the hardest road to his still unfulfilled dream, a Grand Slam title, but he would not see it that way. He was, he confessed, “a bit more confident” but, true to form, he was not diverted from his usual path:

“Whether you’re confident or not confident, providing you work hard and you do all the right things in training, then you’ll get a good result. That was the most important thing, to make sure I kept my feet on the ground and kept working hard and try to improve.”

He was tested most severely by Feliciano Lopez in the third round, wavered initially against Marin Cilic in the quarters, faced the dual test of Tomas Berdych and the wind in the semis—though both carried a feather-light addition to the scales of Murray’s campaign: the Czech had removed Federer from the equation, the wind chiselled his tennis for what would come in the final.

It turned out to be an ill wind that blows nobody any good. This one brought threats of storms, it brought a day’s delay, it brought one of those happy alignments that even the most prescient could not have planned.

In London, on 10 September, an Olympic parade signalled the imminent end of a summer of sporting triumph, and in New York it signalled the last hurdle between Murray and the US title. But it also coincided with the day, in 1933, that Fred Perry won his first Grand Slam title. He was, like Murray, the No3 seed and, like Murray, would play the reigning Australian champion and No2 seed. Perry’s was the record that haunted Murray, for Perry became the last British man to win any Grand Slam, in 1936.

On this Monday, the wind again blew and Murray again showed his variety, his touch, his assuredness in handling such conditions. He took the lead, but Djokovic came back at him, and Murray failed to win five set points in the tie-break before taking the sixth. But that was just the start.

The match demanded buckets of sweat, bloodied knees, wrecked toe-nails and broken rackets. It demanded leads won and leads lost: Murray headed Djokovic 4-0 in the second, found himself back at 5-5, but broke again for a two set lead; then saw that lead become two sets apiece, with his opponent serving first in the decider; he led 3-0 only to serve minutes later at 3-2…this was the nature of the men, the nature of the match. 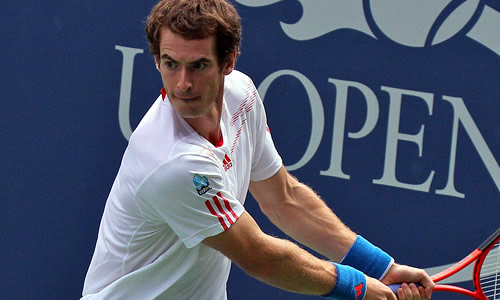 Murray was in sublime form at the US Open in New York as he won an epic five-set thriller against Novak Djokovic to claim his first Grand Slam title (Photo: Marianne Bevis)

Perhaps those memory banks played their part again, that 290-minute match in Melbourne, that fifth set lost. The clock was ticking towards the same total—but Murray had taken time to think before beginning this fifth set: “I had a think and said, ‘It’s just one more set. Give everything. You don’t want to come off this court with any regrets. Don’t get too down on yourself. Just try and fight.’”

And he did. After 294 minutes, he fulfilled what many felt was pre-ordained on this last day of an exultant British summer. It was, rather, the reward for years of toil, years of persistence, years of sacrifice.

The summer began at Wimbledon, a place where words of Rudyard Kipling—“If you can meet with Triumph and Disaster and treat those two impostors just the same”—have inspired generations of men and women just like Murray. But that poem contains lines even better suited to the style of Murray’s winning:

“…If you can force your heart and nerve and sinew, To serve your turn long after they are gone, And so hold on when there is nothing in you Except the Will which says to them: ‘Hold on!’…”

But as the sun had now set on New York as well as London, perhaps it was a moment for American words, spoken by Theodore Roosevelt at the Sorbonne in, by one more happy coincidence, the same year that Kipling’s were first published: 1910.

“The credit belongs to the man who is actually in the arena, whose face is marred by dust and sweat and blood, who strives valiantly, who errs and comes up short again and again, because there is no effort without error or shortcoming, but who knows the great enthusiasms, the great devotions, who spends himself for a worthy cause; who, at the best, knows, in the end, the triumph of high achievement, and who, at the worst, if he fails, at least he fails while daring greatly.”

In 2012, in this British summer of high achievement, Murray was at its start and at its conclusion. Perhaps it was, after all, written in the stars.

In pictures: Murray’s journey from Wimbledon finalist to US Open champion