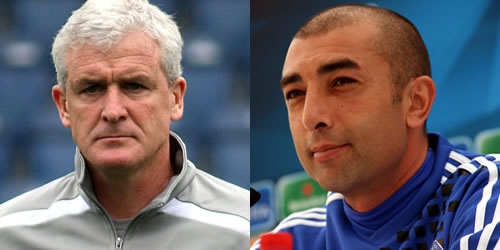 “We are going to respect the protocol and set a positive standard for the millions of people that are going to watch us all over the world, and make people focus more on the football side than other issues. The Premier League is being watched all over the world now and we have to set a good, positive standard for everybody that is watching us and the handshake is just a part of it. It is part of the respect campaign as well and hopefully the game will be played in good spirit. We would like both sets of supporters, especially our fans, to support their team and hopefully there will be no incidents. Football is here to unite people rather than divide people.”

“There’s a lot of debate every time we have a game against Chelsea. The one thing I’ll say – and I have my own views on the handshake, and I’ve raised them at Premier League level before the season started – we’ll be guided by the Premier League and we’ll respect the handshake if that’s what we’re told needs to happen. Apart from that, I don’t really want to go into any depth on it, because we’ve got a really important game and I’m conscious of the fact, almost always when we go up against Chelsea, the issue of a handshake seems to cloud everybody’s mind and the focus is taken from a game which on paper is a great Premier League game, and I think the focus should be put back on that. It’s not my decision to make [whether the handshake happens or not]. We’re governed by the Premier League, and if we’re told to go ahead with the pre-match ritual then we will do that. I’m sure the Premier League will speak to us. I would imagine they will insist the handshake goes ahead. We’ve had discussions about it. I don’t have to broadcast that. I have a view on where they are. But, as I said, if the Premier League says the handshake goes ahead, so be it. We’ll have to wait and see [if Anton Ferdinand refrains from the handshake]. Each of the players has a mind of their own and they’ll make their own decision. It’s unfortunate their put in the situation where it’s in the public domain. I’ve got my feelings on the handshake and the people in the Premier League know my view on that.”