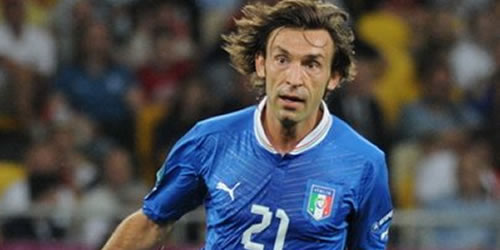 Andrea Pirlo was in top form at Euro 2012 Photo: Football.ua, via Wikimedia

The Juventus veteran has enjoyed a return to form since moving to the Old Lady in 2011, while sparkling at the European championship as Italy lost to Spain in the final.

Mikel made nine appearances in Chelsea’s title-winning Champions League campaign, but the 25-year-old is still looking to improve as a player and he is relishing the chance to test himself against Pirlo.

“Pirlo is a great player,” said Mikel. “Everyone saw what he did in the Euros. He’s been in the game for a long time and he’s a legend in the game.

“For me, every day I come into training, I like learning, even from the younger players,

“Playing against a legend like Pirlo is going to be great.

“But I will be going into the game looking to win, so whatever happens, it’s going to be a battle between both players.

“He’s a great player and I respect him, but once we step onto the pitch we will both want to win.

“Hopefully I can learn something from him on Wednesday.”

Meanwhile, Mikel was pleased Chelsea’s long-term servants such as Didier Drogba got to experience the perfect send off by beating Bayern Munich in the Champions League final in May.

But the Nigeria international has urged the current Blues squad to build on last season’s success and win further silverware under Roberto Di Matteo.

“Last season, everyone knew how important it was for us as players and as a club as well,” added Mikel.

“We had older players who were going to leave at the end of the season and it was going to be their last Champions League campaign with the club.

“So it was really good to win the trophy and we want to build on that. We don’t want to stop.”

• Juventus have not won on their last 11 competitive outings in England, losing eight and drawing three, including their 2003 Champions League final penalty shoot-out defeat by AC Milan.

• Chelsea have finished as group winners in seven of their last nine campaigns, qualifying for the knockout rounds as runners-up in the other two years.

• Fernando Torres and Juan Mata scored past Juventus goalkeeper Gianluigi Buffon in Spain’s 4-0 win against Italy in the Euro 2012 final.

Liverpool striker Fabio Borini: I know the goals will come