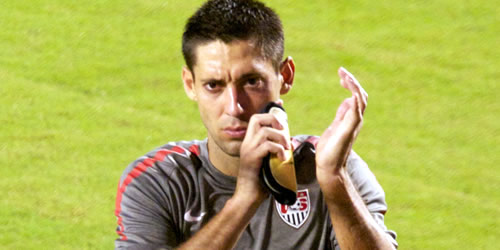 Clint Dempsey has vowed to make the most of his “new challenge” at Tottenham Hotspur after the American winger completed his move from Fulham on Friday night.

The 29-year-old’s future had been a source of constant speculation over the summer and on a dramatic deadline day, both Aston Villa and Liverpool appeared close to signing Dempsey before Spurs struck a late £6m deal for the Fulham talisman.

The former New England Revolution star revealed he is looking forward to working under Tottenham manager Andre Villas-Boas, while also thanking Fulham for handing him the chance to play in the England top flight in 2006.

“To play under this head coach and play for this club is a dream come true. I want to make the most of it and work as hard as I can to get onto the field and do well.

“There are a lot of great players here, I’m looking forward to training and playing with them and trying to fight for a spot in the team.”

Dempsey added: “A lot was said and written ahead of me leaving Fulham. It wasn’t how it was portrayed, but that’s in the past now and we move on.

“I want to thank the fans for everything, some of the best memories I’ve had in football and thank the chairman for giving me the opportunity to come from the MLS and compete over here.

“All I can say is thank you and now I’m looking forward to the next challenge.”

Dempsey scored 60 goals in 225 appearances for Fulham after completing a £2m switch to the Premier League six years ago.