Davis Cup: Marianne Bevis takes a look at this weekend's match-ups, with a host of big names in action 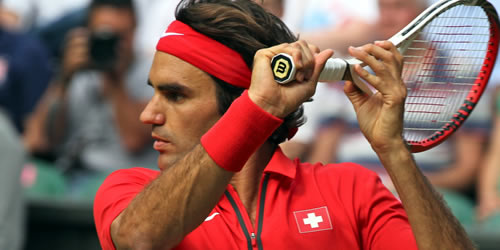 Davis Cup forces a tough turn-around after an exhausting summer of tennis, and the demands are especially heavy on the high-ranked men who have gone deep into the big tournaments.

This summer has been tougher than most. In the window between Wimbledon and the switch to the US Open Series—the big run of two Masters into the final Grand Slam of the year—came the Olympics, so no time off for rest and recuperation.

Davis Cup ties always follow heavy swings—a week after the Australian Open, straight after the doubled-headed hard-court climax of the Indian Wells/Miami Masters and—perhaps the toughest—now after the US Open.

So Andy Murray and Novak Djokovic may be counting their lucky stars that their countries are not involved in make-or-break Davis Cup action this week. For seven others in the top dozen, though, the dilemma remains: to play or to rest.

At the sharp end are the four countries contesting a place in the final, at the other end are those countries fighting for survival in the World Group.

The four semi-finalists are each headed by a top-10 player: Spain, with No5 David Ferrer, takes on the USA, led by No10 John Isner; while Argentina, with No8 Juan Martin del Potro, plays the Czech Republic with No6 Tomas Berdych.

The Spaniards have won 23 home ties in a row, but are playing the most successful nation in Davis Cup history, champions on 32 occasions. The USA last won in 2007, and come to Spain with two wins away from home on clay against Switzerland and France.

There are two prominent Davis Cup stalwarts missing, however. Rafael Nadal remains out of competition with injury and Andy Roddick made his dramatic exit from tennis at the US Open. But such are the riches of both squads that Mardy Fish—still sick—Fernando Verdasco and Feliciano Lopez also do not play, Spain having No12 Nicolas Almagro to back up Ferrer—and both are playing the best tennis of their careers—while the US boasts one of tennis’s best ever doubles teams in the Bryan brothers.

The Czech Republic is aiming to reach its second final in four appearances, having finished runner-up to Spain in 2009, just as Argentina did last year. But as Czechoslovakia, they won the Cup in 1980 and also beat Argentina in that 2009 run.

On rankings alone, this should be a very tight contest. Juan Monaco, at a career-high No11, may need to beat the wily veteran Radek Stepanek to save the tie but the big contest, and perhaps the tie-sealer on Sunday, could come between del Potro and Berdych, who are nip-and-tuck in the ATP race, both in good form and a match apiece on clay this year. The problem for Argentina is that del Potro is carrying an injury in his left wrist, and more best-of-five-setters on the back of the same at the US Open will test him to the extreme.

David Nalbandian, a stalwart of the Argentina side, is out with injury so will not even take part in the doubles.

A noteworthy element of this tie is the participation of No1 Roger Federer, who held off making his final commitment until days before the tie, perhaps encouraged by his earlier-than-expected exit at the quarterfinal stage of the US Open. He is the only one of the top four in action ahead of the vital indoor season that ends the year that will determine whether he can stave off Djokovic and Murray for the end-of-year No1 ranking.

Despite media assertions over the years that he has played little Davis Cup, he has won 41 rubbers, singles and doubles, in 21 ties, most recently the February tie versus the US and this time last year against Australia—a demanding trip to the antipodes days after the US Open to play on grass. It’s a title Federer has not won and he is undoubtedly committed to it.

Noteworthy in this tie is the record of Lleyton Hewitt, who is bidding to overtake Todd Woodbridge’s long-standing record for the most Davis Cup appearances for Australia. Hewitt, at 31 coming back from a succession of injuries and bouts of surgery, nevertheless has shown he still has the talent and fire to worry many players. With 32 ties to his name and 49 wins in Davis Cup, he is lined up to play three rubbers against a below-par Germany without the resurgent Tommy Haas and Philipp Kohlschreiber.

Just as many eyes will be on the performance of Bernard Tomic, who played a lack-lustre US Open, has fallen in the first round of nine tournaments this year, and has failed to make the surge that many expected. How he performs alongside the veteran Hewitt, especially against a not overly strong Germany, will be of some interest.