Toby Roland-Jones has been a revelation on Middlesex’s return to the top flight. Nick Spearing catches up with the 24-year-old 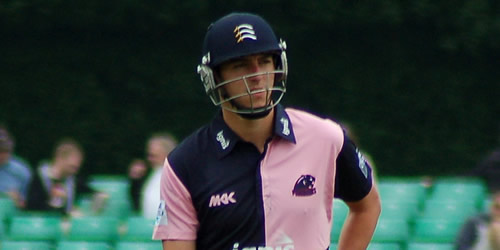 With 59 wickets from 13 County Championship matches, Toby Roland-Jones has been a revelation on Middlesex’s return to the top flight.

Nick Spearing spoke to the 24-year-old seamer about a breakthrough season that has seen him touted for an England Lions call-up this winter.

Middlesex are sitting in a comfortable mid-table position in the County Championship. Would you have taken that at the start of the season?

It’s hard to say really. Maybe midway through the season we wouldn’t have done; I think we thought we could have pushed on from there and it probably didn’t quite happen as we would have liked. It is nice to remain playing first division cricket next year though and give ourselves something to build upon.

How would you describe yourself as a bowler? Is it fair to say you’re someone who relies on accuracy and movement, as opposed to pace?

I would say so, yeah. I am generally just a tall seam bowler, therefore it’s about bowling as many balls as possible in the right area and hoping that one of them is good enough. I’m not actively looking for an extra yard of pace. Hopefully with a good winter and lots of strength training the extra pace will come naturally.

Has your action gone through many changes in the past few years?

There have been changes, but only minor things really. Richard Johnson [Middlesex assistant coach] and myself have worked on numerous things over the winters but never anything that has started from scratch as such. We’ve just carried on tweaking as we have gone.

Is there anyone you’ve particularly modelled your action on?

I wouldn’t really say so to be honest. I have never really looked at anyone and tried to emulate them or copy their action. I think that everyone’s actions are slightly different, none are right or wrong, but they all have little things that could be tweaked.

Having a bowler of Gus Fraser’s experience around must be useful for an up and coming seamer like you?

Gus is good to talk to, obviously. He has a good outlook on the game and a good understanding of the mental side of it. I would say the more technical side of it comes from Richard Johnson, Gus probably isn’t around as much as Richard, but when he is around I just to talk to Gus about the bowler’s way of thinking… he helps to keep everyone’s head in the game and do a job for the team.

You’ve also got a couple of experienced seamers in Corey Collymore and Tim Murtagh playing alongside you. Do they give you plenty of advice?

I’ve learned plenty from each of them. Corey is always a great person to have standing at mid off when I’m running in. He is always on hand when advice is needed, same with Tim really. We see ourselves as a unit. We bowl together and that is important for forming partnerships and making sure we perform as a group.

You’re just behind Graham Onions in the Division One wicket-takers list. Do you have your eye on top spot?

I wouldn’t say it is something that I am necessarily looking to achieve. I only have one game left now and my job in that game is the same as normal: go out there, try and keep it tight and get some wickets.

Have you exceeded your own expectations this season?

I wouldn’t have necessarily believed that I would have got the wickets that I have. My aim is just to play and be a real contributor to the side. I always think I have a real chance of taking wickets and obviously I’m really happy with how this season has gone.

Have you heard any inklings of a call-up to the Lions set-up this winter?

I haven’t if I’m honest. People talk about those kind of things, and I know it sounds cliche, but I have just been thinking about playing cricket for Middlesex and doing well for them. I am obviously going to take up that opportunity if it comes, but I’m not really looking at that too much.