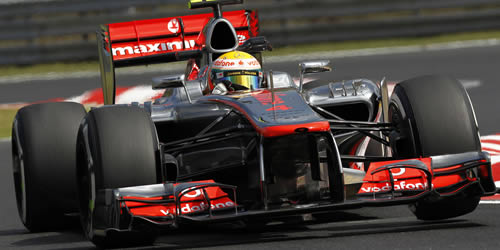 Hamilton will start in pole for the Italian Grand Prix Photo: Courtesy of Vodafone McLaren Mercedes

Ignoring the ongoing speculation about his future at McLaren, Hamilton’s first-place finish in qualifying makes it a hat-trick of pole positions for the team, while Ferrari’s Felipe Massa will start from third.

“It’s been a tough weekend but we’ve managed to work on the setup and the package that the guys brought from the factory,” said Hamilton.

“They’ve done a fantastic job so congratulations to the team and great effort from the lads.

“I managed to do a half decent lap at the end of Q3 so I’m pretty happy and it’s great obviously for the team to have me and Jenson at the front.

“I haven’t had any distractions this weekend so it’s been quite positive and the support from my family friends has, as always, been incredible so I’m just enjoying the weekend.

“It’s been pretty smooth so far.”

Despite topping the first two qualifying sessions, the current Driver’s Championship leader Fernando Alonso will start the race from 10th.

Although the team used a slipstream technique to ensure Felipe Massa qualified in third, a mechanical issue meant the Spaniard will start from the middle of the grid.

Red Bull’s Mark Webber did not make it into the top ten shootout with a Kurs issue, and he will begin from 11th with team-mate Sebastian Vettel in fifth.

It has been an unfortunate start to the racing weekend for Force India, and German Nico Hulkenberg will start from the back of the grid as a drive issue meant he did not set a time.

Team-mate and British driver Paul di Resta has been handed a five-place grid penalty after a gearbox change this weekend, and despite qualifying in his best ever position of fourth, he will now start from ninth.

Williams’ Pastor Maldonado will begin 22nd on the grid after receiving a 10-place grid penalty at Spa last weekend for jumping the start lights.

While Jerome D’Ambrosio is back behind the wheel this weekend, driving for Lotus as Romain Grosjean serves his one race ban and begins from 16th.