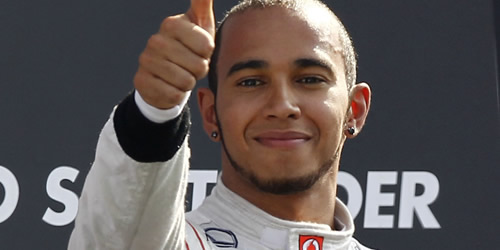 Lewis Hamilton insists it will still be an “incredibly tough” ask for him the win the world championship title this year despite his impressive victory at the Italian Grand Prix on Sunday.

The McLaren driver, whose future has been the subject of constant speculation in recent days, led from pole to flag to clinch his third race win of the year following his triumphs in Canada and Hungary.

The 27-year-old is now just 37 points behind championship leader Fernando Alonso with seven races to go – but Hamilton says he is only focusing on the next race in Singapore.

“It’s going be incredibly tough,” said Hamilton. “Fernando just let the cat out of the bag and said they’ve got a lot of upgrades coming to the next race so I’m going to go back to the factory and hope that the guys are doing the same, which I trust they will be.

“We’ve got seven more races so this is just one step; tomorrow we start again and try to attack in the next race.

“I think Ferrari were as quick as us this weekend – at least as quick as us this weekend – I think if Fernando had a better qualifying I’m sure he would have been up there with me and made the race perhaps a little bit harder than it was. But I think Ferrari seem like they’re very, very quick and we need to stay on it to continue to compete with them.”

Hamilton admitted his delight at securing victory at the historic Monza circuit and hopes his triumph will be the “start of something good” for him.

“It’s an incredible feeling,” Hamilton continued. “It’s phenomenal, you never know what’s going to happen when you come in to a race weekend and the guys have done a great job with the package – I knew that from the previous race with Jenson’s pace, I thought that means I’ve got to do the same here – and the guys did a great job.

“This is a very historic circuit; when I was driving I was thinking that all the greats have won here, so to finally get a win here is just the icing on the cake.

“I hope this is the start of something good in the future coming here as I’ve not had the best results in the past. And also in the future we’ll maybe have a little more support here.”