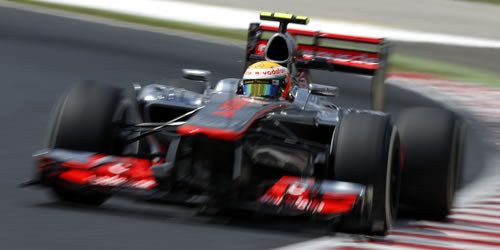 Lewis Hamilton won his third race of the season after the McClaren driver led from start to finish in a thrilling Italian Grand Prix.

Securing his 180th career win, the British driver fended off a late surge from Sergio Perez to make it three successive victories for McLaren on the historic Monza circuit.

Making his move in the final ten laps, Sauber’s Perez breezed past the field into second with current Driver’s Championship leader Fernando Alonso completing the podium to the delight of the Italian crowd.

The three winners had much better races than last week in Belgium when they were the victims of Romain Grosjean’s aggressive move off the start line.

“It’s been fantastic to win here,” said Hamilton. “You have the best crowd.

“I’m just so happy for my team it’s been a fantastic day.

“Fernando is a two-time world champion. He’s incredible so I’m very, very happy for him too.”

Despite starting 10th on the grid, Alonso drove spectacularly, finishing third and retaining his lead at the top of the Driver’s Championship.

Red Bull’s Sebastian Vettel tried to have his revenge on Alonso after the pair’s near-clash last year at the Monza circuit.

The defending world champion squeezed the Ferrari onto the grass at the first Lesmo corner as he tried to stop a takeover manoeuvre, and the pair appeared unable to steer clear of trouble, as they also almost collided in the pit lane.

However, this year, fortune was smiling on Ferrari as the German was given a drive through penalty and later had his second retirement of the season as he parked his car on the side of the track on lap 48.

Moments later, Vettel’s team-mate Mark Webber hit the kerb coming out of the Ascari chicane, leading to a double retirement for the team – the first time in 34 races that a Red Bull driver did not finish in the points.

Ferrari’s Felipe Massa showcased his speed as he dived into second place from the start lights.

Unfortunately for the Brazilian, telemetry issues marked the beginning of his troubles, and unable to keep up the pace, he had to move aside for his team-mate, dropping down the grid to finish in fourth.

McLaren may have entered the race hoping to convert their lock out front row into success on the podium, but the plan did not come to fruition for Jenson Button – a mechanical fuel problem led the British driver to pull over on lap 33.

Jean-Eric Vergne’s race ended on lap nine as the rear end of his Toro Rosso suddenly stepped out as he braked for Turn One, and spinning across the kerb, the Frenchman was sent airborne over the sleeping policemen, making a heavy impact on landing.

After Sunday’s result, Alonso leads the Driver’s Championship with 179 points, and Lewis Hamilton moves into second, 37 points behind, with Finn Kimi Raikkonen trailing him.