Jay Spearing: I don’t see why I can’t have a career at Liverpool 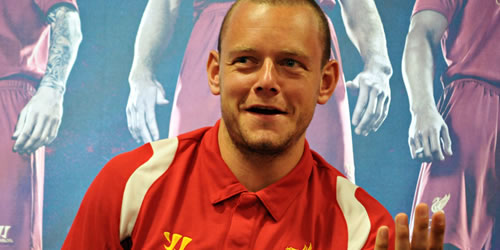 Jay Spearing is hoping his loan spell at Bolton Wanderers will help pave the way for a successful career at Liverpool in seasons to come.

The 23-year-old midfielder joined Owen Coyle’s side on a season-long deal last week after new Reds boss Brendan Rodgers told him he was unlikely to feature regularly for the Merseysiders this season.

And Spearing is now determined to help Bolton secure an immediate return to the Premier League and get some regular football under his belt before returning to Anfield.

“I don’t see why I can’t have a career at Liverpool,” Spearing told the Bolton News. “But I am at Bolton now and I want to produce some good games to get us up into the Premier League.

“I am here for the whole season and I think we will be up there fighting.

“I am ready to play for Bolton and I am going to put in 100 per cent every game and try to get as high up the league as possible.”

Spearing said that he and Rodgers agreed it was best he went on loan to seek the regular football he was not guaranteed of at Anfield.

“At this stage of my career, I do need regular football and that’s one of the big meetings I had with Brendan,” Spearing continued. “If I want to push on with my career, I need to play more regularly.

“He sat me down and we had a really good chat. We both told each other the truths of how we thought the season was going to go.

“So, we decided it would be a good experience for me to come out and play some football. I had a few opportunities to go elsewhere but it’s not about that now.”

Spearing made 25 appearances for Liverpool last season after returning from a brief loan spell at Leicester City in 2010.

Everyone at Liverpool needs to be patient, admits Glen Johnson