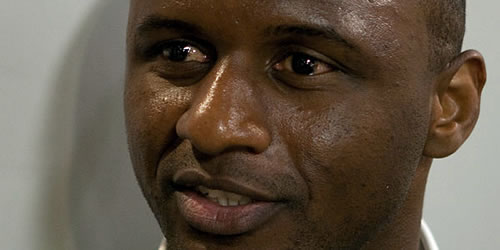 Patrick Vieira has heaped praise on Maicon after the Brazilian sealed a deadline-day move to Manchester City from Internazionale.

The Brazilian full-back spent six seasons at the San Siro, making 235 appearances for the Serie A side before moving to Eastlands last month in a £3m deal.

And City’s football development executive Vieira, who played alongside the 31-year-old during his stint at Inter, is backing the Premier League champions’ latest recruit to prove himself as a valuable addition to Roberto Mancini’s side.

“Maicon is a fantastic player. I spent a few years with him at Inter and he has experience and talent,” said Vieira.

“He has the ambition to be part of the Brazilian national team for the World Cup. It is something really important for him and I am sure he will bring a lot to this football club. He is a fantastic character to have around too.

“Maicon has the experience of winning the Italian league and the Champions League and to have him at the football club is fantastic.”

Chelsea defender Gary Cahill: I’m back to square one with England