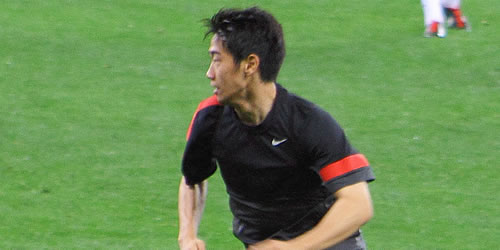 Paul Scholes has been impressed by Shinji Kagawa Photo: S Dhansay, via Flickr

The 23-year-old, who was signed in a £12m deal from Borussia Dortmund, has started all three of United’s opening Premier League fixtures, with the midfielder scoring his first goal for the club in the 3-2 victory over Fulham.

Scholes, who came out of retirement last January, has been particularly impressed by Kagawa’s movement and how easily the former Dortmund start has linked up with United’s forwards.

“All the new signings have settled in well. Shinji [Kagawa] has been with us since the start of pre-season so he’s had a good amount of time to settle in. He’s a top class player who did great in Germany and we’re lucky to have him,“ Scholes told United’s website.

“Shinji is just a clever footballer who gets into those great positions where it’s difficult for other teams to pick him up. He’s always on the move which makes it easier for the midfielders to find him.

“He really fits in with the way we play. It’s important that he links up well with the midfielders and centre forwards and he’s already shown he’s clever enough to do that. He’s very intelligent and someone we all enjoy playing with.”

“You always like to see new players come in even if they’re in your position because it’s healthy for the team and exciting to play with the new players,” he added.

“We’ve got strength everywhere in the squad. We’ve struggled with injuries to defenders, but when we have everyone fit I think there are two teams that the manager has available to him and that could compete in the Premier League and cup competitions.

“It all looks very healthy and, as players, we know when we get given our chance we have to take it. If you don’t, you’ll be out of the team, simple as that.”