QPR boss Mark Hughes: Djibril Cisse is still ‘very much in my thoughts’ 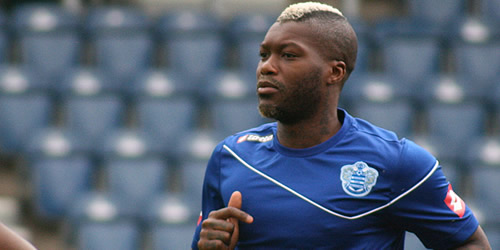 Mark Hughes has insisted Djibril Cisse is still very much in his thoughts despite a slow start to the season for the Queens Park Rangers striker.

The 31-year-old did not start any of QPR’s last three Premier League games against Manchester City, Chelsea and Tottenham Hotspur, being utilised as a second-half substitute.

Instead, Hughes has opted to use Junior Hoilett, Andy Johnson and Bobby Zamora, with the latter netting at White Hart Lane on Sunday.

But Hughes maintained Cisse, who has scored six goals since moving to Loftus Road, still has an important role to play at the Hoops as the manager’s tactical plans vary against different opposition.

“He started the first two games and then I changed things around with different formations and different challenges,” said Hughes.

“I just felt Bobby and Andy would help us in those games. So he’s gone out of the team.

“We know exactly what Djibril gives us. He’s an outstanding finisher. As a team, we’re strong and compact and we have enough quality about us to be able to release Djibril at the right time to show what he can do.

“As I said, we haven’t quite got the solidarity in terms of performance to do that yet. But even if Djibril isn’t in the team, he’s a great impact sub to be able to bring on and change games.

“So the different type of forwards I’ve got is a comfort to me. It allows me to make changes to personnel and playing different opposition, we can pose different threats to whoever we’re playing against. He’s very much in my thoughts.”

Man United’s Rio Ferdinand: We can cope without Nemanja Vidić