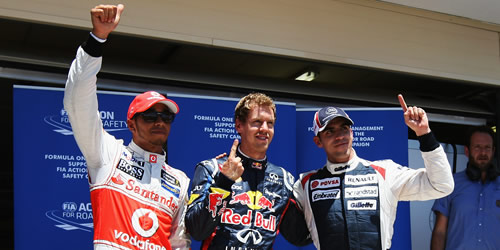 Sebastian Vettel made it a hat-trick of practices as he topped the timesheets to finish fastest in the final session, beating McLaren’s Lewis Hamilton by three tenths of a second at the Marina Bay Street Circuit .

Taking a clean sweep of practice sessions, the German was looking dominant as he set two fastest lap times and will be confident heading into qualifying.

British driver Hamilton was also looking quick and he is expected to have more pace to bring in qualifying.

Despite Ferrari engineers working on current Driver’s Championship leader Fernando Alonso’s car in the first part of practice, the Spaniard was looking sharp on the circuit, finishing three tenths behind McLaren in third position.

It looks as though it will be a fierce battle between these three drivers for pole position, especially as they are the only men to win this night Grand Prix.

During the first half of the hour long session, McLaren team-mates Jenson Button and Hamilton seemed to be enjoying competing against each other as they traded fastest times.

Sergio Perez had a tense moment in the early stages when carrying too much speed into the corner, he hit the Armco barrier as he passed under the grandstand – the Mexican was forced back to the garage where engineers raced against the clock to fix the car.

Red Bull’s Mark Webber later became a victim on the same corner, hitting the barrier harder than the Sauber driver and giving him a rear puncture.

HRT’s Pedro de la Rosa will face a five place grid drop as the team were forced to change his gearbox for Sunday’s race, but it is unlikely to affect him too much as the Spaniard has started from the back row for most of the season. He also finished third practice having clocked the slowest time.

With two minutes and 20 seconds to go, the session was red flagged as Caterham’s Vitaly Petrov clouted the wall on turn 21, losing control and spinning across the track – he coasted to a stop in the entrance of the pit lane, meaning the session had to be halted.

Despite this being a night race, third practice was largely conducted in the Singapore sunshine, meaning the teams will have struggled to gain a true reflection of what conditions will be like for Sunday’s Grand Prix.

With the race result likely to rest on tyre strategy, with a 1.5 second gap between the soft and super-soft tyres, a good qualifying result will be crucial for the teams.