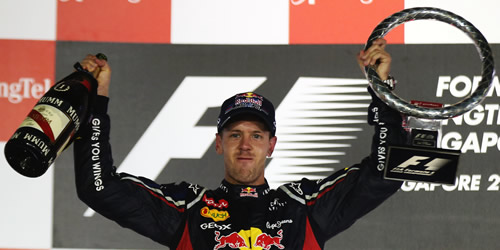 Red Bull’s Sebastian Vettel took victory for the second consecutive year at a dramatic Singapore Grand Prix as Lewis Hamilton was forced to retire early on.

Having been disappointed with his third place start position after topping the timesheets in all practice sessions, the defending world champion seized victory in what would have been a two-car race had Hamilton’s McLaren not suffered a gearbox failure.

Despite the sombre mood in the McLaren garage, the team salvaged a result as Jenson Button finished in second and Ferrari’s Fernando Alonso sealed a third-place finish.

Although Vettel was saved from a collision with Button thanks to the British driver’s fast reactions at the safety car restart, the German driver made himself the only man to win twice at the Singapore circuit.

“I think it’s one of the toughest races of the year,” said Vettel.

“The circuit is a killer and it’s so bumpy and so long. We benefited from Lewis’ failure, I saw some oil drop from his car a few laps before, and all in all we had a good race all weekend.”

“I’m just incredibly happy and proud to win it. I’d like to dedicate the win to Sid Watkins, I think he’s one of the biggest reasons why we enjoy ourselves every week so a big thank you to him.”

“Anything can happen in this race and it’s a lot of fun to watch but we just have to keep pushing now so we finish ahead of those guys come the end of the season.”

With his championship hopes dashed, Hamilton had his race cruelly terminated on lap 23 when he suffered a surprise gearbox failure.

Pulling up on the side of the track with his McLaren stuck in neutral, the British driver was told over the radio: “We have a gearbox failure. I’m sorry. We did everything we could yesterday.”

The 27-year-old, who has only ever won or retired at the Marino Bay circuit, touched the wall while defending his pole winning time in qualifying on Saturday.

Although McLaren said that there was no sign the incident caused Sunday’s mechanical failure, the speculation about Hamilton’s future with the team will ramp up as yet another car failure dents his championship chances.

With Formula 1 races restricted to two hours, the 61-lap race was reverted to time remaining in the closing stages after two appearances from the safety car. 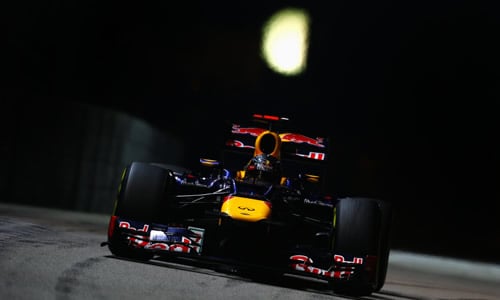 The first was caused when Narain Karthikeyan hit the tunnel wall under the grandstand. Ferrari’s Alonso and Force India’s Paul di Resta were the winners from this period, moving up into third and fourth respectively.

The safety car was deployed moments later for the second time on lap 40 when the oldest man on the track ended the youngest man’s race. Mercedes’ Michael Schumacher was caught out by Jean-Eric Vergne’s lack of acceleration, locked his brakes and drove straight into the back of the Scuderia Toro Rosso. Schumacher, who caused a crash for the second year in succession, takes his seventh retirement this season.

Force India’s Di Resta finished in fourth but his team-mate Nico Hulkenberg found himself at the back of the pack after collisions with both Sauber drivers in the space of two laps. The German picked up a puncture after the separate collisions, which saw both Sergio Perez and Kamui Kobayashi lose part of their front wings.

Bruno Senna, who also clouted the wall in qualifying, faced a five-place grid drop as the team opted for a different decision to McLaren and changed the gearbox. On a circuit which demands a high number of gearbox changes throughout the race, the team suffered a double retirement as Senna lost power in the final laps.

Having become notorious this season for some questionable driving incidents, Pastor Maldonado’s retirement came on a day which saw one of his best performances this season. His early retirement during the first safety car period was caused by a hydraulic issue.

It was a nervy day for Ferrari’s Felipe Massa. Picking up a puncture on the first lap, the Brazilian managed a spectacular recovery on lap 44 when fellow countryman Bruno Senna squeezed Massa against the wall and only some very skilled driving managed to keep Massa from crashing.

Vettel’s victory marks a dramatic change to the drivers’ championship, putting him into second in the table, 29 points behind Alonso.

The Ferrari driver extended his lead to 194 points, with Lotus’s Kimi Raikkonen remaining in third as the Formual 1 heads to Japan.