Singapore Grand Prix 2012: Red Bull team principal Christian Horner believes the top six drivers are all in the race for the title 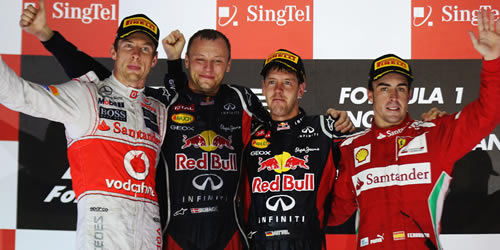 Christian Horner believes the top six drivers in the Formula 1 standings all have a chance of winning this year’s world title with six races to go.

Sebastian Vettel sealed victory at the Singapore Grand Prix on Sunday to move within 29 points of leader Fernando Alonso, who finished third behind Jenson Button at the Marina Bay Circuit.

Kimi Raikkonen, Lewis Hamilton and Mark Webber are behind the defending world champion in the standings, with Button in sixth and 75 points behind Alonso.

And Red Bull team principal Horner believes all six drivers are in with a shout of winning this year’s title ahead of the Japanese Grand Prix on 7 October.

“The championship is wide open. It’s just annoying Fernando keeps popping up on the podium at the end of the grand prix,” said Horner.

“Sebastian was 25 points down with two races to go in 2010, which indicates anything is possible for all the drivers.

“We need to keep taking points off Fernando, which ideally means getting a few more cars between us and him.”