US Open 2012: Laura Robson becomes first British woman to reach 4th round of a Grand Slam in 14 years with win over Li Na 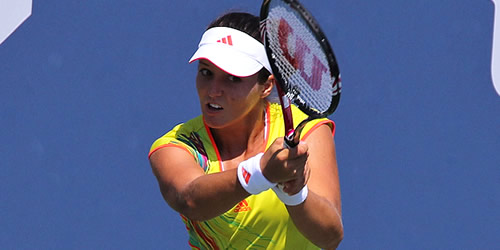 When the draw for the US Open was made, all British eyes searched for where the three British women in the main draw had fallen. It was not good news.

Anne Keothavong faced No6 seed Angelique Kerber in the first round, the powerful German who made her breakthrough here this time last year and has now despatched not just Keothavong but also Venus Williams in one of the women’s matches of the tournament so far.

Heather Watson drew No9 seed Na Li, last year’s French Open champion and the first woman to make the finals of the back-to-back Montreal and Cincinnati Premiers in the same year. She never let the top-ranked Briton into the match, and despatched Casey Dellacqua in the second with similar ease.

But of the three, Laura Robson had possibly the worst. She opened against a wild card but then faced the three-time former champion Kim Clijsters, unbeaten in New York in 22 matches.

Robson, the youngest of the British quartet—that now also included qualifier Jo Konta—turned out to be the giant killer on the biggest of Flushing Meadows’ stages, Arthur Ashe. She beat the retiring Clijsters in scintillating form, and put it down to growing experience and hard work:

“I think every match that I play against a tough opponent, like Sharapova, I get more experience from it and I learn a lot…I think previously I just sort of slipped up a little bit in the key moments…today I managed to stick with it.”

She added, as an aside on Arthur Ashe: “I just worked my butt off!”

The experience she referred came at Wimbledon in 2011 where she took Sharapova to a first-set tie-break before losing her second round match. She also happened to beat Kerber in three in the first.

And she clearly took her Clijsters experience into her third round match against, as a fluke of the draw would have it, against Watson’s conqueror Li.

Robson started like a steam train, going 40-0 on Li’s serve. The Chinese woman pulled her back but Robson had a fourth chance and took it. The lead, though, was short-lived and Li levelled, 2-2. That, too, was short-lived as Li, struggling with the pressure of Robson’s aggressive return of serve, hit two double faults, and Robson converted another break point at the first attempt.

Robson felt the full force of Li’s sharp, cleanly-hit balls—she is one of the most balanced movers on the tour—and a backhand into the net followed by a double fault levelled things again. But not to be outdone, Robson grooved a backhand return of serve to draw a vital error from Li to take the set, 6-4.

Robson’s fame has been spreading with each match she has played at Flushing Meadows, and the vast Louis Armstrong arena, where every seat suffered from the hottest sun of the tournament so far, was now close to capacity.

She and Li gave both sets of fans more to cheer in the second, starting with a break and a counter break. Robson’s big swinging lefty serve and her powerful forehand have traditionally been her major weapons. That probably explained why Li piled her forehand into that wing. But today, Robson’s backhand was formidable, angled deep and wide out of the reach of Li on numerous occasions. Indeed, by the end of the match, she made no more errors on the backhand than the forehand.

Each had just one more break chance in the set as they went toe-to-toe all the way to a tie-breaker and it was Robson who edged a small advantage at 3-1—again earned by the Robson backhand. Now, though, Li was striking the ball beautifully, and a blistering return of the Robson serve hit the baseline, flew and Robson shanked it. The match would go to a third.

Finally, though, it was trusty backhand that converted her third chance: After 2 hrs and 12 mins, she led and would not concede her advantage again. On the contrary, she broke again in the seventh and served out the set, 6-2, as though she’d been beating top seeds all her life. Perhaps after her last match, that is how she feels.

And so back to the draw that looked as unkind as it could be, that threw up first Clijsters, then Li. Commenting on putting out two Grand Slam champions and now facing a third, she smiled: “I have had a fairly tough draw, haven’t I?”

For it throws up nothing less than the US defending champion, Sam Stosur. The Australian with the huge kick serve and the crushing forehand has not dropped a set so far and is looking in fine form. But then so was Li.

And Robson sounds more relaxed, more confident and—a great sign—more mischievous every time she faces the media. Asked if she had seen that Wayne Rooney was tweeting about her match: “He called me Robinson…Can you blame that on predictive text? I’m not so sure.”

And of having actor James Cordon in the arena: “I spotted him midway, like first set, and then spent the rest of the time trying not to wave.”

Beyond Stosur, should Robson claim a quarterfinal place, is the No1 seed herself, Victoria Azarenka. But then Robson, at 18 the youngest woman in the top 100, is already the first British woman since Sam Smith in 1998 to reach the fourth round of a Grand Slam—Wimbledon—and the first to do so at the US Open since Jo Durie in 1991.

And as she said: “You have to beat who is in front of you. That’s what I managed to do so far. I play Stosur now, who is defending champ.

That’s going to be really tough. I’ve never played her before, so I’m going to just work hard tomorrow and recover as best as I can for the next one.”

Robson may have made her first appearance, at just 15, at Wimbledon in 2009, and she may have reached the second round of Wimbledon and the US Open last year, but surely 2012 will go down as the year that the Olympic silver medallist came of age in New York.