US Open 2012: There’s no clear favourite for the title, says Djokovic

US Open 2012: World No2 Novak Djokovic insists there is no clear favourite to win Monday's final between him and Andy Murray 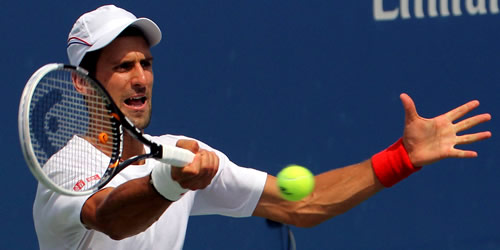 Novak Djokovic insisted there is no clear favourite to win the US Open crown after the Serb booked his place in the final against Andy Murray by beating David Ferrer at Flushing Meadows.

The 25-year-old secured a 2-6 6-1 6-4 6-2 victory over Ferrer to reach his second successive US Open final after beating Rafael Nadal in New York last year.

British No1 Murray will be looking to claim his maiden Major title on Monday, and the five-time Grand Slam winner is expecting to face a fully-motivated third seed.

“We were all praying for less wind today. I was very lucky the first set was interrupted by the weather yesterday,” said Djokovic.

“He handled the wind much better than me. I came in today a different player and I’m really happy to be in another Grand Slam final.

“It’s the final of a Grand Slam and I don’t think there is any clear favourite. He is looking for his first major title and I’m sure he is very motivated.

“Hopefully we can come up with our best tennis for this crowd.”

On Saturday, Djokovic struggled to temper the blustery conditions at Flushing Meadows, with his Spanish opponent breaking the Serb twice in the opening set to lead 5-2 before play was abandoned.

Despite Ferrer going on to claim the first set, a much-improved Djokovic took the next three with moderate ease, but the defending US Open champion admitted it was still a “relief” to progress into Monday’s showpiece.

“It’s definitely a huge relief to get through this match,” he added.

“David is a great competitor and I have huge respect for him – he’s one of the fittest players on the tour, never gives up and it was a pleasure to play against him today.