US Open 2012: Roger Federer into last eight as Mardy Fish pulls out

US Open 2012: Mardy Fish withdraws from his fourth-round clash with Roger Federer to hand the Swiss a quarter-final spot 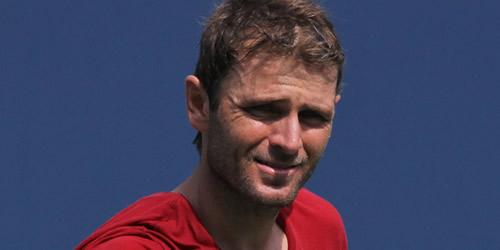 Mardy Fish was due to play Roger Federer in Round 4 Photo: Marianne Bevis

Mardy Fish, the American No23 seed, has withdrawn from his scheduled fourth-round match this afternoon against Roger Federer, citing “health concerns.”

Alarm bells began to ring after he cancelled his usual post-match press conference Saturday night following his third-round match against Gilles Simon and did not make a belated appearance yesterday.

The precise reason for his withdrawal has not been given. His statement said simply: “I regret that I have to withdraw for precautionary measures.

“I was reluctant to do so, but am following medical advisement. I had a good summer and look forward to resuming my tournament schedule in the fall.”

However, Fish had major health concerns earlier this year that necessitated minor heart surgery. He did not play the European clay-court season and withdrew from the 2012 French Open, citing fatigue.

He afterwards revealed that, following his loss at the Miami Masters in March, he was taken to hospital with severe arrhythmia, and in May he underwent surgery to correct an irregular heartbeat.

Fish’s first tournament back since then was Wimbledon where he lost in the fourth round in four sets, and he decided not to play at the London Olympics.

He competed in Washington and then reached the quarters of both the Toronto and Cincinnati Masters before coming to the US Open. But here, he played three heavy matches in succession to stack up more than nine hours on court. His first match included two tie-breaks, his second was a comeback from two sets down to beat Nikolay Davydenko, and his third against Simon ran to over three hours and four sets.

Despite his upbeat statement, these are clearly worrying times for the 30-year-old who put together a career-best season in 2011 to break the top 10 and qualify for the World Tour Finals for the first time.

His success came on the back of a concerted late-career change in his training regime, diet and ambitions and the rewards started to flow in 2011. After a quarterfinal finish at Wimbledon—only the second Grand Slam quarter in his 12 years on the circuit—he reached three straight finals in the US Open series, including the Montreal Masters and the title in Atlanta.

It’s a heavy blow to the tournament and the American fans, too, coming hot on the heels of the announcement last week that Andy Roddick will retire after this event, and the exit of the top home seed, No9 John Isner, in the third round last night.

The withdrawal of Fish gives Roger Federer a direct pass to the quarterfinals, his 38th at a Grand Slam, where he will meet No6 seed, Tomas Berdych, who defeated Nicolas Almagro, 7-6, 6-4, 6-1. It is the Czech man’s 200th hard-court victory.

The scheduled Federer-Fish match was then replaced by Marin Cilic versus the unseeded Slovak, Martin Klizan.