Eighteen-year-old Laura Robson, the youngest player in the top 100, seems to have grown before our eyes.

It is just a year ago that here, in a room of half a dozen journalists and having just lost her second-round match at her first ever US Open, it was hard to resist the impulse to simply stand up and put a maternal arm around her shoulders. Close to tears and looking younger than her years, she fulfilled the media obligations that come with rarefied air of Grand Slam tennis. 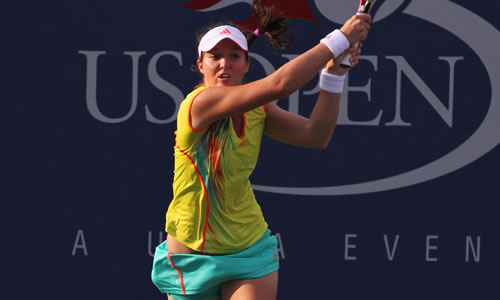 This year, she has been accorded the status of the burgeoning star she has become. After her first match on the biggest stage, Arthur Ashe, and beating the sentimental favourite at this year’s US Open, Kim Clijsters, she took her place behind the broad sweep of the main conference room desk. She still looked young, but began to sound older.

By the time she had despatched her second Grand Slam champion, Na Li, on another show court, Armstrong, she had the assurance of an old hand. She smiled, she joked, she played the audience like a pro.

Asked about her route to the fourth round via Clijsters and Li, she paused: “I have had a fairly tough draw, haven’t I?”

The maturing player in her, though, continued: “Well, you know, you have to beat who is in front of you. That’s what I managed to do so far. I think I play [Sam] Stosur now, who is defending champ. That’s going to be really tough…my game is based on being aggressive, and if I don’t play that way then I probably wouldn’t be doing very well.”

Yes, she had another Grand Slam champion in the fourth round, the defending champion, and one of the few women left in the draw who had reached this stage without dropping a set.

Robson did, indeed, have to stick to her natural game, an aggressive one of big serves, big forehands and, as she showed against Li, a fast-improving backhand.

But she would also have to adapt to a very different kind of shot from her opponent. Where Li hits a clean, crisp ball through the court, Stosur applies weight with heavy top spin and a notoriously difficult kick serve to the Ad court. In Robson’s favour was her lefthandedness which might help negate the kick with her forehand.

Stosur started confidently but Robson kept to her plan and went for her shots. It earned her a break in the third game, but a loose forehand error handed the break back. She had more chances in the ninth game but Stosur timed her big serves to perfection and held. Now the focus turned on Robson, and with even better timing, Stosur struck a sequence of serve returns to pressure Robson 0-40. The Briton saved two but the third was a double fault. The first set went to the Australian, 6-4. 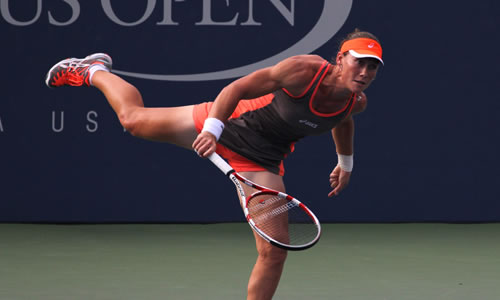 The Robson tally of errors was already up to 19, clearly struggling to handle the heavy Stosur groundstrokes. With the second set, the number continued to grow, and her cause was not helped by her first serve letting her down in the early stages.

She opened the fourth game with a double fault and a backhand fired long gave Stosur the first break of the set and a 3-1 lead, but Robson, despite a rising error count that would top 22 for the set, did not back down.

Stosur, upping the tempo with each game, advanced to 5-2 with a second serve ace, but Robson responded with the longest game of the match: 19 minutes’ worth. She battled through a couple of double faults, nine deuces and five match points to finally hold her serve, 3-5, and the place erupted. The first set took just 37 minutes: the second was extending towards an hour.

Now Stosur served for the match but Robson jumped on her kick serve for a winner down the line, made another forehand winning return for a break point, and she was back on level terms.

Stosur has not always found it easy to close out matches and there was a sense that the pressure on her was growing. But experience told—that, and possibly the mental fatigue of Robson’s emotional run in New York. Stosur belted a couple of backhand return of serves and then a forehand winner to create two more match points and she took the second.

The upside to an attacking game is the winner count, but the downside, when confronted with someone doing the same, is the error count. Today, the latter outnumbered the former 41 to 17. But Robson, who revealed she has now attracted the attention of camera crews at her hotel, gave credit to Stosur:
“She makes you feel you’re playing badly: Her serve is really special—I’ve never played anyone with a serve like hers before.”

She acknowledged, though, that she had made too many errors: “I’m disappointed because I didn’t play as well as I could have.”

But this has been one outstanding run from Robson, a run that should take her from a current career-high ranking of 88 to a new high of around 75. She is rewarding herself, before heading off to the Asian swing for the autumn, with a day’s shopping in New York.

And, asked what she was looking for in particular, the deadpan humour, borne of her new confidence, was in action again: “I find if you go out with an open mind, you find a lot more.”

Yes, she has grown in front of our eyes but, just as important, she will undoubtedly have grown in the eyes of her competitors, too.