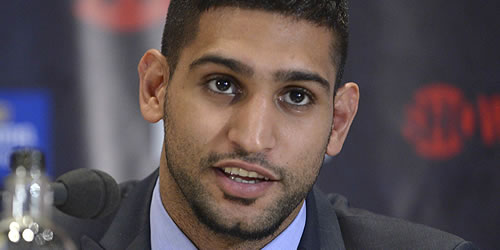 Unlike a lot of boxing news conference rhetoric, the statement was not overloaded with hyperbole. A young, articulate, former Olympic medallist and with an almost entirely scandal free personal life, Khan is indeed supremely marketable as a boxer.

Unfortunately, given his choice of profession, the one thing that has let him down over the years has been his boxing and now the boy from Bolton is at a hugely important crossroads in his career.

Things started well for Khan after turning professional, winning his first 18 fights including 13 knockouts, over the space of three years.

Then on the 6 September 2008, he suffered his first setback, a shock first round defeat by American fighter Bredis Prescott. Not only was it a fight he was expected to win, but the loss also raised serious questions about the fragility of Khan’s chin.

However, Khan reacted well to the defeat, regrouping quickly by parting ways with his old team and taking on the hugely respected trainer Freddie Roach, regarded as one of the best in world boxing.

It was a sensible move; Roach had a knack for turning naturally gifted but flawed fighters into champions. Something he had demonstrated in turning Manny Pacquiao from a one-handed powerful and speedy brawler into a complete fighter and arguably the best pound-for-pound boxer in the world.

Success followed, his comeback fight against Oisin Fagan ended with the Irishman knocked out 97 seconds into the second round. It was almost a surprise the fight had lasted that long.

Victory over Mexican legend Marco Antonio Barrera was followed by a World Title win over Andreas Kotelnik and then an extremely successful defence against the previously unbeaten Dmitriy Salita – a fight that lasted just 76 seconds.

More challenging fights were won too, such as his 12-round points victory over Marcos Maidana, which went on to be voted 2010 Fight of the Year by the Boxing Writers Association of America.

However, just as 2011 was drawing to a close, things started to go awry for Bolton’s favourite pugilist. He lost in controversial circumstances to Lamont Peterson, a marginal split decision going against him amid talks of biased refereeing and a mysterious ‘man in a hat’ influencing judges.

To many the complaints smacked of sour grapes from Khan although he was to some extent vindicated when Peterson failed a drugs test ahead of their proposed rematch.

However, Khan’s next fight would also end in ignominy, his WBC Super Lightweight title shot against Danny Garcia in Las Vegas being stopped in the fourth round and raising old questions about the 26-year-old’s fragile chin and boxing intelligence.

It was another big and somewhat unexpected setback in the career of a fighter many had greater expectations for, and one that some thought he would not recover from.

But Khan went away determined to rebuild his career and just as after his first major loss, he parted ways with his trainer.

This time appointing Virgil Hunter, named by American boxing writers as trainer of the year in 2011 and the man who guided Andre Ward to the WBA and WBC super-middleweight titles, as the new man in his corner.

It is fair to say that he is now at a fairly crucial point in his career. Khan’s next opponent is Carlos Molina, unbeaten in 18 fights and enjoying a good year including his most recent win over Marcos Jimenez that earned him the WBO Intercontinental title.

Another consecutive defeat would surely be a blow from which Khan could not recover and end any hopes he had of carrying on as an elite fighter.

But victory would go a long way to healing the wounds of the past 18 months and potentially put him back on track to being the fighter his natural ability deserves.

On 15 December, those watching at the LA Sports Arena and tuning in all across the world could be witnessing the re-coronation of ‘King’ Khan or just as easily his abdication.

Only time will tell.

England’s Ben Youngs surprised by speed of recovery after operation