Amir Khan: I’ll put the last 18 months behind me against Carlos Molina

Amir Khan vows to put the past 18 months behind him against Carlos Molina on 15 December, reports Charlie Reynolds

By Charlie Reynolds at the Mayfair HotelTuesday 9 October 2012, 17:34 UK @thesportsfox 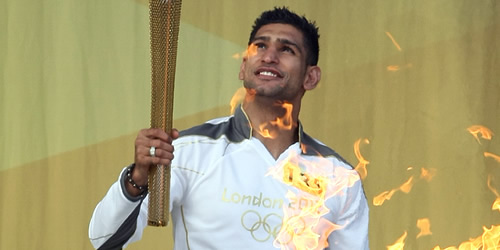 Amir Khan has vowed to put the last 18 months, some of the most turbulent of his career so far, behind him and to reclaim a position among world boxing’s elite.

The 26-year-old has lost his last two fights. The first, to Lamont Peterson, was unfortunate and embroiled in controversy.

The second, to Danny Garcia, was stopped in the fourth round, Khan unable to combat the Philadelphian’s devastating assaults and consigned to a defeat many thought he would struggle to recover from.

However, the Bolton boy is back and has vowed to get back to his former glory.

“I am looking forward to getting back in the ring and continuing my career,” said Khan

“I believe in myself and my abilities. I will fight for a world title again and I will be world champion again,” he pledged.

“I want to finish the year off with a bang.”

To help him with this quest, Khan is working with a new trainer, following his recent split from Freddie Roach, who is insistence on focusing on Manny Pacquiao was a source of tension between the pair.

“I wasn’t getting everything I wanted from Freddie,” said Khan.

His new trainer is Virgil Hunter, named by American boxing writers as trainer of the year in 2011 and the man who guided Andre Ward to the WBA and WBC super-middleweight titles – it is a move that Khan is clearly very happy with.

“Everyone in boxing knows about his skills and the success he has enjoyed over the last few years,” he said.

His next opponent is Carlos Molina, unbeaten in 18 fights and enjoying a good year, his most recent win over Marcos Jimenez earned him the WBO Intercontinental title, and he is not an opponent that Khan is underestimating.

“All undefeated fighters are extremely dangerous and he is a smart boxer. He’s not a bad fighter.”

Molina, also 26, is known for his speed and accuracy and being California born is sure to have a large following for the fight in Los Angeles on 15th December.

“I look forward to this fight and the opportunity to fight someone like Amir Khan,” said Molina.

“I expect him to fight with a new intensity, but I will be prepared and ready. I am the undefeated fighter and I intend to keep it that way.”

The fight at the LA Sport Arena, is being marketed as a ‘fanfest complete with musical acts, memorabilia and meet and greets with some of boxing’s biggest stars’.

For Khan, things are much simpler: “This is the time when I’m going to prove myself.”