Shanghai Masters 2012: Andy Murray plays Roger Federer for a place in the final against either Tomas Berdych or Novak Djokovic 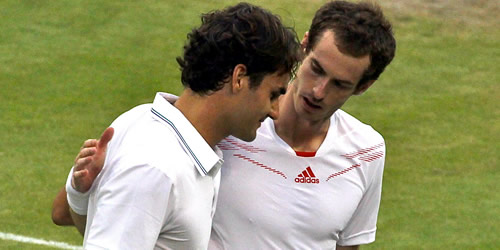 This has become, it seems, the tournament of targets and milestones.

Along with a dozen or so men competing for a place in the World Tour Finals and Roger Federer and Novak Djokovic chasing the No1 ranking, Andy Murray was pursuing his third consecutive Shanghai Masters.

Barely had the ink dried on the story of Federer’s 300 weeks as world No1 than his old friend and fellow 30-something Tommy Haas was bidding for his 500th singles win to join just three other active players to do so: Lleyton Hewitt, Rafael Nadal and Federer himself.

Another of the old guard, Radek Stepanek—who reached No8 in the rankings back in 2006 and played in the Masters Cup in Shanghai in 2008—beat Hewitt, No11 seed Gasquet and No8 seed Isner to reach a quarter-final face-off with Murray. And while few rated his chances, the Czech’s only win in five meetings with the Scot was exactly three years ago on a court very like Shanghai’s. It was the indoor Paris Masters, a famously quick surface that is very much to the liking of all-court players—players like Stepanek.

Murray came into the quarters on the back of an impressive win over the tricky Alexandr Dolgopolov. However, with a walkover in his first match, he had not built up any real rhythm on this court, and against Stepanek it showed.

The Czech plays an attacking game, chasing into the net not just on his own serve but on his opponent’s, and it earned him a break in the fifth game. Stepanek consolidated his lead with a love hold, happy to trade sliced angles with Murray on the slick surface until an opportunity to net-rush appeared.

Murray’s efforts to counter this quick, intelligent strategy resulted in 10 unforced errors after just five games, and the confident Czech went on to take the set comfortably in just 39 minutes, 6-4. The stats told their own story: For Stepanek, 10 winners, one dropped point from 17 first serves, and 100 percent success at the net; For Murray, three winners, no break point chances, and just one point from his two ventures to the net.

By the third game of the second set, Murray had still made only three winners—and none of them off the ground. But with the fourth game came a transition. It was full of long, rich rallies that had the crowd gasping with every shot. At deuce on Stepanek’s serve, the two men played cat and mouse through a 36-shot rally, and from this, Murray could begin to take heart, for Stepanek needed long pauses between serves to regain his composure.

Murray is the younger by eight years and one of the fittest men in tennis. Stepanek still managed to out-manoeuvre him to win the next point and the game, but the extended points finally took their toll in the sixth, and Stepanek served a poor game to give Murray the lead, 4-2.

The Scot, though, double faulted in the next game, smashed his racket in frustration and Stepanek, for once the calm man on the court, came in for a winning smash to bring up break-back points. But Murray finally found some winners—two of them in succession—and then took the net for a volley winner. The momentum shift was complete and, with a certain inevitability, Stepanek hit a tired forehand into the net for another break and Murray levelled the match, 6-2.

If Murray thought Stepanek was spent, he was wrong, and the final set began with some more high-quality exchanges. The fourth point of the set went to 27 shots, won by Murray, and the next point was a one-strike winner, taken by Stepanek.

It was surely, in the end, tiredness that drew three straight break points from three volley errors by Stepanek. Where Stepanek had won eight out of eight volleys in the first set and six out of eight in the second, he was already at zero from three by the third game of the third. Yet against the run of form, Stepanek produced an ace, a volley winner, and a forehand winner down the line to hold, and promptly turned the tables on Murray.

Stepanek defused his opponent’s game with crafty slice and angle before delivering the killer blow, a running forehand pass that earned him a well-deserved break.

Now, though, the clock had ticked past two hours and Murray began to look far the fresher man. The longer the rallies lasted, the more fluent the Murray game became and the more errors Stepanek made: Murray broke back, 2-2.

This time, Stepanek really was spent. He took one more game but Murray dominated the final 15 minutes to take the match, 6-3.

The defending champion will have to step things up for his semifinal, his fourth encounter this year against Federer. The Swiss found far better form against Cilic than his sluggish performance against Stan Wawrinka in the previous round, and finished the Croat’s run in an hour and 21 minutes, 6-3, 6-4.

Djokovic took just two seconds fewer to snuff out Haas’s hopes of his 500th win in Shanghai. And what looked, on paper, like a longer battle between Nos 6 and 8 in the race to London, the big men Tomas Berdych and Jo-Wilfried Tsonga, only ran to two sets and an hour and a half, 6-3, 7-6, to Berdych.

So the semifinals will feature the top four seeds, all with much on the line. Murray beat Federer the last time they met, in the final of the Olympics, but lost to him at Wimbledon and in the final in Dubai. However Federer, who has never won the Shanghai Masters, lost to Murray in the final here two years ago.

Meanwhile, Berdych is hoping to seal his place in London but has beaten Djokovic only once in 10 meetings.

But away from that and all talk of year-end rankings, the wiry and wily 33-year-old Stepanek was playing, and winning, a place in the doubles semis. Nor does he have to worry about London: He has already qualified for the doubles competition there with Leander Paes. What’s more, he also has a date with Berdych in December—on the same side of the net, in the Davis Cup final.

It seems there is just no keeping some 30-somethings down.