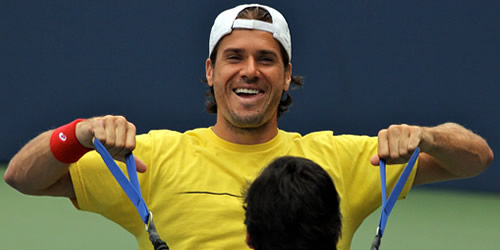 Tommy Haas is the 38th man to win 500 matches in the Open era Photo: Marianne Bevis

The second round of an end-of-season ATP 250 tournament may not be the high-spot of a year that celebrated Andy Murray taking Olympic gold on his home Wimbledon turf, or saw Roger Federer reach the all-time record as No1, and marvelled at Rafael Nadal winning a seventh French Open title.

But this particular match, played away from the international spotlight in Vienna, was a match worth marking. For it saw the evergreen, and ever-popular, Tommy Haas reach 500 match wins, beating Jesse Levine 6-4, 6-2.

It is a milestone that has been reached by just 37 others in the Open Era, and only three are still active on the men’s tour. And while Haas may be the only one of that band—Federer on 871 wins, Nadal on 583 and Lleyton Hewitt on 566—not to have a Grand Slam title, his achievement is a remarkable one for the road he has travelled to reach it.

It’s a journey that began in 1996, the year the German turned professional and won his first tour match: It was in Indianapolis against Dick Norman and the 18-year-old notched up two more wins there before losing to the top seed, Pete Sampras, in the quarter-finals.

Haas reached his 100th win in the semis of Stuttgart in 1999, having already won his first title in Memphis, reached the finals in Sydney and the semis of the Australian Open before he turned 20.

By 2001, his tally was at 200 and Haas seemed destined for the very top. He won his first Masters in Stuttgart along with three other titles, and made the final of the Rome Masters and No2 ranking by the following spring.

But already the elegant German was bedevilled by injury. He had broken one ankle just as he made the transition from junior to senior status. Within a year, he broke his other ankle. In the run-up to the Sydney Olympics, he suffered a bulging disc in his back though went on to win silver.

His possible progress to No1, however, was brought to an abrupt halt after a severe accident nearly claimed the lives of his parents and left his father in a coma. Haas would spend much of 2002 taking care of his family, and he went on to miss most of 2003 when a shoulder injury required major surgery.

2004 brought his first great comeback, a surge from outside the top 1,000 to No17. It won him the ATP Comeback Player of the Year Award—but fate was not yet done with him.

In 2005, he twisted his ankle at Wimbledon, suffered a wrist injury in 2006, tore stomach muscles during Wimbledon 2008, and his troublesome shoulder reduced him to the 80s once more.

Such a drop in his 30th year might have been the final straw, but he was ready to prove his strength of character again.

In 2009, he played one of the matches of the French Open, taking the first two sets before losing to Federer, reached the semis of Wimbledon, and won his first title in two years, his first on grass, in Halle, beating Novak Djokovic for the first time along the way. Again, the German defied the odds to become one of the biggest risers in the rankings: He ended the year at No17.

The end of 2009, however, hinted at more problems: retirement in the second round of both the Canadian and the Shanghai Masters and then withdrawal in Stockholm. Come 2010, Haas managed just eight matches before needing right hip surgery and, a month later, right elbow surgery.

When he returned to the tour in May 2011, now as a father and ranked 896 in the world, he lost his opening match at the French Open and went on to win only seven matches in the year. He even had to qualify for Vienna, but his run there proved to be the start of another comeback.

Ranked outside the top 200, Haas began 2012 slowly, retiring in a Challenger in March, then pulling out of qualifying in Houston in April. Gradually, though, the fitness started to return. He made the semis in Munich, came through qualifying to reach the third round of the French Open, before winning his first tournament back where he had won the last three years before: Halle. What’s more, he beat Federer for the first time in a decade to do so.

The Haas and Federer friendship goes back to junior days but their senior rivalry began at the 2000 Sydney Olympics, which Haas won. Since then, the German had taken Federer to five sets in three of their four Grand Slam meetings yet had only beaten the Swiss once in their 11 meetings.

If anything announced the German’s return to top-flight tennis, Halle did, and he used the occasion to affirm his continuing ambitions—and the motivation that fatherhood had brought to his tennis: “I would like to celebrate my 500th victory on the ATP Tour. I would like to win another title…and I would love my daughter to see me play live, but she has to grow a little in older for her to understand what I’m doing.”

Since then, there have been runner-up finishes in two 500s, Hamburg and Washington, the quarters in Cincinnati and Shanghai and, along the way, his 13th Wimbledon and 15th US Open.

But it is back in Vienna, 12 years after he reached the final and 11 years after he won the title here, that he achieved his wish to join the ‘500 wins’ club. After a career like his, he was right to call it “one of my biggest achievements after everything that happened.”

At 34, Haas is now routinely categorised as ‘a veteran’, though evergreen seems more generous. He plays aggressive, elegant tennis, is emotional yet sporting on court, and boasts one of the best-looking single-handed backhands in his sport. Indeed looking at his lithe, energetic tennis, it is hard to believe just how many comebacks Haas has been forced to make. But he has just earned the rare distinction of a place on the shortlist for the Comeback Player of the Year Award—eight years after he won it the first time.

After Vienna, Haas is off to Valencia and the Paris Masters looking ahead to another year of challenges: A title at 35? A top-15, even a top-10 ranking? With an injury-free Indian summer, who knows where this latest comeback will take Haas.