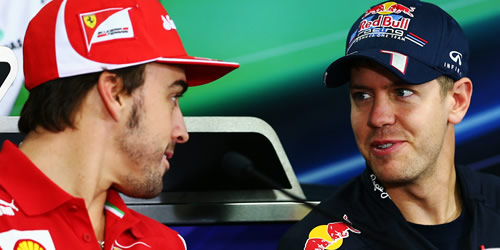 Ferrari have moved to quell speculation claiming that Red Bull’s Sebastian Vettel will be joining the Italian team from 2014 by insisting they do not want “to have two roosters in the same henhouse”.

Ferrari are expected to announce that they will be retaining Felipe Massa for 2013 this week, sparking a fresh wave of speculation suggesting that Vettel is to take his place from 2014, with some reports claiming the German has already signed a pre-contract agreement with the team.

However, Ferrari chairman Luca di Montezemolo appears to have poured cold water on the rumours linking both Vettel and Red Bull designer Adrian Newey with his team in an interview posted on Ferrari’s website on Monday.

“Today the problem is not with drivers. 2013 is still to come but I don’t want to have two roosters in the same henhouse, rather two drivers who race for Ferrari and not for themselves,” he said.

“As for Newey, I can say that he is very good at his job but we also managed to win eight constructors’ titles in the last 13 championships without him: I have huge faith in our own engineers.”

And when asked about Massa’s improved form in recent races, he added: “You can see from the constructors’ championship that he has returned to the levels that we used to know well.

“I expect a lot from him and his capacity to take points from our rivals.”