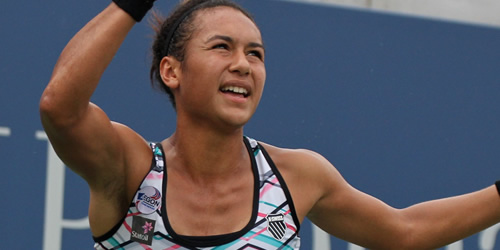 Heather Watson fended off four match points in the final set of a marathon three-and-a-quarter hour match to become the first British woman to win a WTA singles title since 1988.

The 20-year-old beat Kai-Chen Chang of Chinese Taipei in the Japan Open final in Osaka, 7-5, 5-7, 7-6, having never even reached a semi-final in a main tour event before, and can expect her current No71 ranking to surge toward the 50 mark.

Both women faced multiple break points in all three sets, but Watson, who served at over 70 per cent for the whole match, converted one more than her opponent in the first set and then served for the match at 5-3 in the second before Chang broke back to win four straight games and level the match.

At 5-4 in the third, Watson fought off four match points and the women headed into a tie-break. The 21-year-old Chang, who like Watson had never gone beyond the quarters of a WTA event before, had taken two-and-a-half hours to beat top seed Sam Stosur the day before, and it was Watson who now held her form.

After three hours and 11 minutes, and with exactly 129 points apiece, the Briton took the set, match and title, 7-4.

Watson’s success comes just three weeks after the current British No1, Laura Robson, reached her first WTA final at the Guangzhou Open in China, but Watson’s win will take her past Robson to reclaim the No1 position that she took for the first time in the aftermath of her best-ever Wimbledon run this summer.

Within an hour of her victory, Watson returned to court to try to claim the doubles title with veteran Kimiko Date-Krumm. However, they were beaten by American duo Abigail Spears and Raquel Kops-Jones, 6-1, 6-4.