Indian Grand Prix 2012: Ferrari's Fernando Alonso is convinced he is still in with a good shot of winning the world title this year 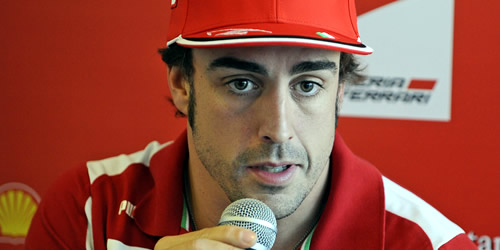 Fernando Alonso is convinced he still has a good chance of winning this year’s world championship title despite seeing Sebastian Vettel leapfrog him into first place in recent weeks.

And the Spaniard is sure he still has a good chance of closing the gap on Vettel ahead of this weekend’s Indian Grand Prix.

“My situation is quite good, you could say it’s the second best situation as we are almost on the same points total as Vettel, with four races to go and there is every possibility open for the championship,” said Alonso.

“It’s true that in the last few races, Red Bull has been very strong and quick, but we have seen all year that there have been ups and downs for everybody, so we need to improve our situation and our level of competitiveness and try to catch them.

“As for my motivation, it is better than ever and not just me, the whole team is very motivated, everyone in the team wants this championship.

“We have struggled all year with our car, especially in the first part of the season and now with four races to go, we are going on full attack for the last month with everyone in the team so focused.”