Indian Grand Prix 2012: Lewis Hamilton feels his recent results have not reflected his performances on the track 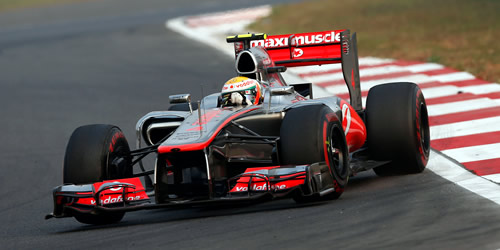 McLaren’s Lewis Hamilton believes he has been driving “better than ever” in recent weeks ahead of next weekend’s Indian Grand Prix.

Hamilton is fourth in the drivers’ standings and a seemingly insurmountable 62 points behind leader Sebastian Vettel after his disappointing 10th-place finish at the Korean Grand Prix.

But the McLaren driver, who has signed a three-year deal to drive for Mercedes from next year, feels his recent results have not reflected his performances on the track.

“I didn’t have a particularly tidy weekend [in India] last year,” Hamilton said. “But I feel I’ve been driving better than ever recently – even if the results haven’t quite shown it – so I’m headed to India determined for another good result.

“I think we’ll have a car that’s a match for the circuit and I can’t wait to get out there and start practicing on Friday.”

Hamilton also had praise for the track in Greater Noida, claiming it is set up to produce more exciting races than most modern circuits.

He added: “Most modern tracks have a very similar feel – you find that the same driving style and rhythm suits them all. But the Buddh International Circuit is different: it has more in common with a great track like Spa than it does with any number of the more modern places we visit.

“And that’s because it’s got an incredible flow – basically, from Turn Four, a wide-apex right-hander that sweeps downhill, the track is just a series of fast, rolling curves which really allow you to put the car absolutely on the limit.”