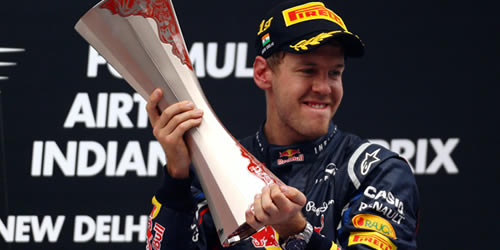 Leading from pole to flag, the German won his second consecutive victory in India, becoming the first driver to win four successive races in a season since Jenson Button in 2009.

Despite one momentary scare for Vettel when sparks flew beneath his Red Bull as headed into turn four, it was a solid performance from the defending world champion, even returning straight into pole position after his solitary pit stop.

“There’s always a really nice trophy here so I’m really happy to pick up another nice one.”

“It’s a very special grand prix. I don’t know what it is about this circuit but I really like the flow of it. Sector 1 is a bit slow with long straights, but then sector 2 and 3 are really nice and I think we all enjoy that.”

“Big thanks to the team. I said on the radio every single one is pushing very hard and I think there’s not one thing that stands out to make the difference – not today, not yesterday, not Friday. It’s all of us standing together hand in hand. If we’re here on the track or back in Milton Keynes everyone is pushing really hard so I’m very, very happy and I’m glad to be part of that and just enjoying the moment.”

“I think if we speak about the world championship obviously this is one great step for us, but there’s still a long way to go and we’ve seen this year how quickly things can change.

“As I said earlier this feels so fantastic to be up here and have a race like that where everything just works how you want it to. I’m very, very proud and very happy and enjoying that.”

Fernando Alonso did his best to limit damage to his drivers’ championship chances, working his way up the grid from fifth to a podium finish second.

Having cut through both McLarens in the opening stages, the Ferrari driver took Mark Webber on lap 48 when the Red Bull lost its Kers advantage.

Although managing a late surge on Vettel, Alonso could do nothing to stop the German extending his championship lead.

Lewis Hamilton, who fell back into fifth position from the start, looked like he may pick up a podium in the closing stages as he chased down the Red Bull of Mark Webber.

But the surge was too late for the British driver, who finished 0.692 seconds behind the Australian in fourth, but ahead of team-mate Jenson Button in fifth.

It turned into a difficult day for Ferrari’s Felipe Massa. Although showing impressive speed and a competitive edge from the start, the Brazilian was told to employ fuel-saving tactics.

Having to slow to conserve his position, he finished in sixth, eventually pulling up on the race track after crossing the finish line.

It was a grand prix in which punctures were prevalent.

The first victim was Mercedes’ Michael Schumacher as he had to head to the pits after a rear-right puncture on the first lap. The German later ended his race early on lap 58.

Sauber’s Sergio Perez then picked up a puncture on lap 22 which proved terminal after getting clipped by Daniel Ricciardo’s front wing on turn four.

And Williams’ Pastor Maldonado was the final casualty of a tyre puncture as he tried to get past Sauber’s Kamui Kobayashi. He succeeded but then lost control with a right-rear puncture and found himself in the gravel.

The championship is still alive, mainly between these two drivers, as the season heads to Abu Dhabi next weekend.