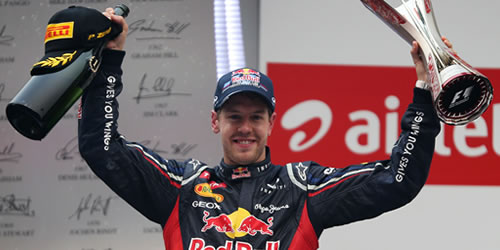 Sebastian Vettel has laughed off reports suggesting the Red Bull driver has signed a pre-contract agreement with Ferrari.

Vettel, who extended his drivers’ championship lead to 13 points with victory at Sunday’s Indian Grand Prix, has been widely reported as having penned a deal to join the Italian outfit from 2014.

But the German insists the rumours are nonsense and claims he is happy at Red Bull.

“There is nothing to tell, nothing I have signed,” he said. “It is amusing. I don’t know where it came from.

“There is nothing to report and I am very happy at Red Bull Racing.”

Red Bull team principal Christian Horner added: “Sebastian Vettel without a shadow of doubt, will be part of the Red Bull Racing team in 2014.

“Sebastian and the team have a very strong relationship. We both know exactly where we stand now and for the future.

“Of course all members read the media, they read the internet, so it was important to dispel any speculation that he may be going elsewhere. I did that on the day the rumours were circulated.

“Sebastian has been with Red Bull since he was 12 or 13 years of age. He has achieved all his grand prix victories in Red Bull-designed cars.