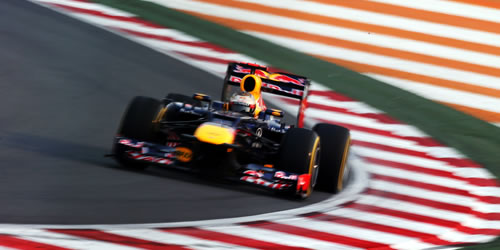 Team-mate Mark Webber, who has said he will continue to race until victory is mathematically impossible, qualified second, just 0.044 seconds behind the German.

It is Red Bull’s third consecutive front row lock out and Vettel’s 35th career pole position as the team continue their late surge on the championship.

“I think first of all it was a tight session, especially in the end,” said Vettel. “In my first run I did a mistake in turn 4 and had to abort the lap, so that was not as planned.”

“Before that we had quite a good qualifying session so we decided to go for another run and had only one other set of tyres left.”

“Fortunately I got the lap together and was very happy with the lap itself here. Here and there I could have been a bit faster, especially around turn 4, but this time I made sure I wasn’t locking up the front.”

“All in all I think it was a great weekend so far and no problems with the car. I think the boys have been working extremely hard. We had lots of feedback from the factory, which was very helpful from yesterday to today, so thanks as well to those guys there.”

“We have to keep pushing. We have a lot of races to go, important races but our best chance of doing well is to really focus on every single step so in today’s qualifying I think we got a very good result and now we look forward to the race.” 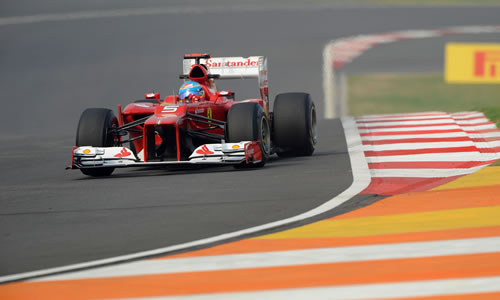 “You know the races these days. A lot of things can happen. It’s a hard race coming up tomorrow. I think everyone was quite competitive [in practice] and tyres seemed to last reasonably well so we’ll see what that means for strategy tomorrow.”

McLaren’s Lewis Hamilton will start from third, despite a suggestion that his time was harmed from congestion on the race track as he began his fastest lap in Q3. Jenson Button in the fellow McLaren will start alongside him.

Despite using ‘towing’ tactics, Fernando Alonso was unable to close on the Red Bulls and McLarens, qualifying in fifth, with Felipe Massa just 0.084 seconds behind in sixth.

Alonso couldn’t hide his grimace as he walked back to the pit lane, as with his main title rival on pole, the result leaves him with much work to do on Sunday.

Lotus’ Kimi Raikkonen, who is third behind Vettel and Alonso in the drivers’ championship, will start from seventh.

There was a nervy moment for Massa in Q1, when the Brazilian spun across the track for the second time this weekend and had to head into the pit lane.

Romain Grosjean also had a torrid day as a wobble saw him briefly off the circuit, across the grass and out in Q2. Starting from 11th it’s only the second time this season that the Frenchman has failed to make the top 10.

Having made the top 10, Nico Rosberg and Mercedes decided to save a set of tyres and opted not to set a time in the final session.

With Red Bull on imperious form, Sunday’s Indian Grand Prix will prove crucial in the race for the drivers’ championship.