Japanese Grand Prix 2012: What lessons did we learn as Sebastian Vettel closed the gap on leader Fernando Alonso? 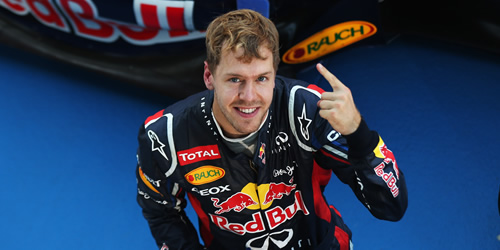 The defending champion’s second successive win, combined with Fernando Alonso’s retirement on the first lap, means the German now holds the momentum leading into the final five races of the season. That major players such as Alonso and his team-mate Mark Webber were removed from contention early on should not take away from the dominance Vettel showed on Sunday. After inheriting his win last time out in Singapore, Vettel was in a class of one throughout both qualifying and race at a track where he must wish he could race every week. With the Red Bull showing impressive pace, McLaren and Ferrari are being left to scrap with the Saubers, who are taking vital points away from the other championship contenders. With Yeongam the next stop on the calendar – a race he won last year – don’t bet against Vettel making it both a hat-trick of wins and a hat-trick of titles.

Massa in the shop window

Felipe Massa’s storming drive to second place in Japan may just have saved him his Ferrari seat, but if it is a case of too little too late, the Brazilian has shown team bosses further down the pit lane he can still do a job on his day. In scoring his first podium position for almost two years, Massa has improved his chances of staying with Ferrari no end, but the team’s indecision on announcing their second driver for 2013 is not an encouraging sign. Challengers Paul di Resta and Nico Hulkenberg have both done decent jobs for Force India this year and the Scot lies only 25 points behind Massa in the standings driving a car with significantly less money invested in it. Massa’s surprise performance at Suzuka came at exactly the right moment for both him and the team – with Alonso out before the second lap and Ferrari desperate to stave off Lotus in the constructors battle, Massa’s haul of 18 points was as much as they could hope for given the supreme drive from Vettel. It’s probably a lot more than they thought possible with Massa starting way back on row five. The empty seat at Sauber could be a good move for Massa should he not be kept on at Ferrari.

Kobayashi needs to be in F1

It seems very odd to me that Kamui Kobayashi’s seat at Sauber is not confirmed for 2013. The Japanese driver may have been overshadowed by Sergio Perez this year but he has still contributed to an amazingly successful year for the team. While still prone to the odd error, Kobayashi’s daring but quick driving has helped Sauber progress over the three seasons and he has matured admirably on track. In keeping Jenson Button behind him on Sunday, he became the first Japanese driver to score a podium finish since Takuma Sato back in 2004. His first podium has been long overdue and he could’ve been a major contender for such a position in Spa had he not been a helpless passenger in the first corner smash. For Sauber to build on their exceptional progress this year, there needs to be some continuity – with Perez gone, Kobayashi can once again establish himself as the team’s main man.

Just as Pastor Maldonado starts to calm down, scoring his first points since Barcelona, Romain Grosjean continues to make costly mistakes. The Frenchman’s almost unprecedented one-race ban for causing a pile-up at Spa does not appear to have completely solved the problems he is causing himself and other drivers. His first lap recklessness could be overlooked at the start of the season to an extent – an undeniably quick driver readjusting to racing in F1 after over a year out. However, his accident rate does not make for pleasant reading. That the stewards decided to use a stop and go penalty – a punishment rarely used in recent years – to punish the Lotus man for his mindless smash into Mark Webber is telling. The ten seconds he was stationary in the pits must’ve seemed like forever. Following the penalty, Grosjean appeared to be scared of going for an overtake – see how long it took him to get past Heikki Kovalainen’s Caterham. It would be a shame if a driver of Grosjean’s undoubted talent feels afraid to push for an overtake because of the reputation he’s gained recently. However, he must surely know both the FIA and Lotus will not tolerate many more shunts.

In some ways, 2012 has been the best year of Michael Schumacher’s second spell in Formula 1. The seven-time world champion has secured his first podium position in six years, won pole position in Monaco (before a five-place grid penalty was applied for crashing into Bruno Senna in the previous race) and has been in numerous points scoring positions before his Mercedes expired on him. However, there have been just as many bad moments – using the back of Jean-Eric Vergne’s Toro Rosso as a landing mat in Singapore and being knocked out of qualifying by Kovalainen in Bahrain. That Schumacher’s retirement announcement last week appeared little more than a side-note to Lewis Hamilton replacing him at Mercedes in 2013 is sadly inevitable given his overall performance in the last three seasons. In his first career, he would have passed Daniel Ricciardo in a flash. Sadly, those new to F1 in recent years will have these memories of Schumacher and not his all-conquering form which made him a legend.