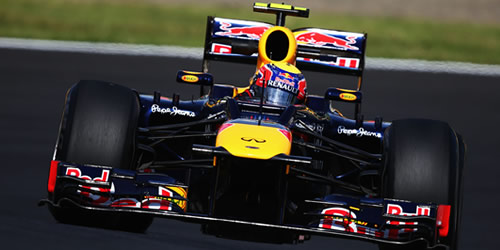 The Australian’s 1m 32.493s knocked two full seconds off Jenson Button’s time of 1m 34.507s, which had topped the first session at Suzuka.

Hamilton, who is set to join Mercedes from next season, was second-quickest ahead of defending world champion Vettel.

“It was a nice change to get some good weather; it’s been the first dry weekend for a while.,” said Webber.

“We have plenty to go through this evening, it was a smooth one for us today and we completed all the runs we wanted to.

“It’s a challenging venue in terms of balance here, but the car ran well and we tested both tyres. We have areas where we can improve, mostly with the balance, so we have some work to do.

“Suzuka is a great track that’s remained untouched for a long time, it’s a classic.”

Hamilton was pleased with his day’s work after having posted the second-quickest time in both practice sessions.

“It has been quite a smooth day,” said Hamilton. “I love this circuit, so it has been really great fun.”

Vettel, who secured a second straight world title at this circuit last year with his third-place finish, added: “The car’s performing, but there are still some things we can improve.

“It was a bit nervous this morning, better this afternoon, but we need to make a step overnight.”