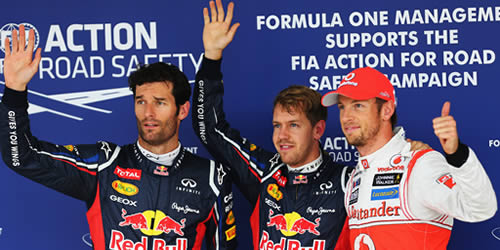 The defending world champion, who has been in a league of his own all weekend as he finished fastest in final practice and Q2, set a time of 1:30.839 early in the final session.

The German, who is chasing Ferrari’s Fernando Alonso in the drivers’ championship, improved on his pole-winning pace, before a spin from Kimi Raikkonen made the Red Bull’s lap time untouchable under yellow flag conditions.

It is Vettel’s 34th career pole, putting him third on the all-time list, behind Michael Schumacher (68) and Ayrton Senna (65).

Mark Webber will start alongside his team-mate, marking the first Red Bull front row lockout of the season, as he finished 0.2 seconds down on his team-mate.

Despite qualifying third fastest, McLaren’s Jenson Button will begin eighth due to a grid penalty for a gearbox change after Singapore, moving home favourite Kamui Kobayashi just behind the Red Bulls in third.

“We had a very good qualifying session and it was very smooth, almost perfect.

“We didn’t have the best start yesterday but we seem to get better every time we go out. The car feels fantastic so all in all it came together nicely and we hope for a good race tomorrow.

“It’s nice to see the support we get at Suzuka and it’s great to come here and drive the circuit the way that I did.”

McLaren’s Lewis Hamilton will have a fight to pick up significant points from Sunday’s race as he starts down in ninth after being hit by the yellow flags in the final session.

Mercedes, who have hit the headlines this week with the acquisition of Hamilton and the retirement of Schumacher, were disappointing on the track.

Only scraping through in the final seconds of Q1, the seven-time champion, who took a big crash in Friday practice, qualified in 13th but has been given a 10-place grid drop after his shunt in Singapore. Team-mate Nico Rosberg will start from 15th.