Japanese Grand Prix 2012: Red Bull's Sebastian Vettel leads from start to finish in Suzuka to put the world title in his sights 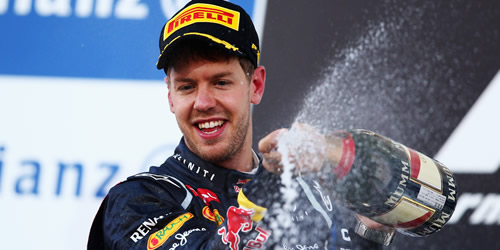 Sebastian Vettel claimed a brilliant victory at the Japanese Grand Prix to put the Red Bull driver in a strong position for the world title.

In one of his most comfortable victories, the German led from pole position to chequered flag, closing the gap to Fernando Alonso to just four points.

Marking the first time a driver has taken back-to-back race wins this season, the 25-year-old has a third consecutive world title in his sights as he made it his third win in four years at Suzuka.

Ferrari’s Fernando Alonso had his race ended early for the second time this season as a puncture in a first corner collision with Lotus’s Kimi Raikkonen terminated his weekend’s efforts.

However, all was not lost for Ferrari as team-mate Felipe Massa snatched his best result in two years and a place on the podium in second position, boosting the chances of the Brazilian keeping his place at the team next year.

Home favourite Kamui Kobayashi delighted the crowds as he took a career-best finish third, becoming the first Japanese driver to finish on the podium here since Aguri Suzuki in 1990.

“I saw the safety car at the beginning but I had a very good start and that was very important,” said Vettel.

“I knew behind me there was a crash and I saw a Ferrari was out but wasn’t sure which. Halfway through I was looking to see the others and I saw there [Ferrari] car still racing Felipe, I didn’t know what happened to Fernando.”

“The atmosphere has been unbelievable all weekend. There has been so much support, the stands have been full and that really makes our job feel very special.”

“Thanks to the team, all the guys pushed so hard. When you’re dreaming at night, you dream one day about racing a car like that. The balance was so good and that’s why there was a gap to behind. I’m very happy.”

“It was an important step today [in the championship] but there is still a long way to go. Look at the last couple of races and since Spa – it’s been very much up and down. We don’t know what will happen in the next race but let’s try and take the point points. It’s been a long season with crazy racing.”

In a race that was littered with incidents, the first corner proved to make or break many drivers’ days at Suzuka.

The Lotus of Raikkonen ran slightly off the road, touching Alonso’s left rear tyre as he rejoined, puncturing and pushing the Spaniard into a race-ending spin.

Meanwhile, fellow Lotus team-mate Romain Grosjean put Red Bull’s Mark Webber into a spin, which left the Australian to fight to ninth position from the back of the field. Grosjean was given a 10-second stop-and-go penalty for what was his eighth first lap incident in 14 races this season.

In a separate incident, Williams’ Bruno Senna hit Mercedes’ Nico Rosberg, forcing him to retire and a safety car to be brought out to clear the debris.

McLaren finished in a subdued fourth and fifth with no team orders to help Lewis Hamilton capitalise on Alonso’s early exit.

Hamilton salvaged fifth place ahead of Raikkonen, despite complaints that his McLaren was unbalanced, and fellow British driver Jenson Button led the way for the team with a late charge on Kamui Kobayashi.

With five races to go, it is Alonso’s title to lose and Vettel’s to win in a car that, according to paddock rumour that swept through the Suzuka paddock like wildfire on Sunday morning, now boasts a Double DRS device that has given the Red Bull serious straight-line pace.