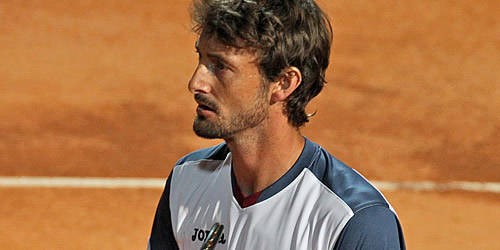 It seemed only right that Juan Carlos Ferrero, former French Open champion and world No1, should bid farewell to his long and golden career in Valencia.

Not only is the joint owner of the 500 Valencia Open, which is held in one of the tour’s most stunning modern venues, but he was born, bred and still lives in this corner of Spain.

The end, when it came, was swifter than he may have hoped though probably no faster than he expected. For Ferrero drew, with a certain irony, his close friend and compatriot Nicolas Almagro in the opening round and Almagro, still aiming to qualify for the ATP World Tour Finals, took just an hour and 40 minutes to bring down the curtain, 7-5, 6-3.

After a 14-year career that has enjoyed the heights of achievement, it is little wonder that Ferrero found the occasion “very emotional…When I first saw the draw, I was really not happy because [Almagro] was one of the few players I didn’t want to play. We’re best friends, we practise together, and Nico is also trying to qualify for the Barclays ATP World Tour Finals. I was really not happy, but then the nice side of it is that I played my last match against a very important person for me, a great friend.”

In a rare departure form protocol, Ferrero was even joined in his press conference by Almagro who described the match as “the sourest victory” of his career.

Ferrero tempered his fans’ sadness by announcing that he still hopes to play some doubles tournaments in 2013—he is still in a crowd-pleasing doubles partnership with joint owner of the Valencia event, David Ferrer—and he will continue to play a large part in Valencia and in tennis through the tennis academy he runs at his local home.

The popular Spaniard turned professional, aged 18, in 1998 and quickly rose to the top, winning his first title in Mallorca.

In 2000, he reached the semi-finals of the French Open but it was in the Davis Cup final that year that he stepped into the spotlight: He played the winning point against Lleyton Hewitt to take Spain to their first triumph. Spain has dominated the tournament ever since, winning four more times, and are in this year’s final—and Ferrero even played a part in that run too. He beat Kazakhstan’s Mikhail Kukushkin in five sets in the first round.

In 2002, he reached the finals at Roland Garros, won the title in 2003—his only Grand Slam—and went on to reach the final of the US Open. And that took him to No1 in the rankings for two months.

Until 2012, he had reached a final in every year of his pro career, but after finishing 2003 with the Madrid Masters title, he would not win another tournament until 2009. He contended with a string of injuries—in 2008 alone he pulled out of Roland Garros and Wimbledon with leg problems and at the US Open he had a shoulder injury.

Then Casablanca 2009 marked the first step in a major resurgence. A new fitness regime, and ambitions to reach the top 10 again, reaped rewards.

2010 brought Ferrero titles in Umag, Buenos Aires and Costa do Sauipe, he reached the final in Acapulco, the semis in Stuttgart and the quarters in Monte Carlo and Hamburg, all of which took him into the top 20 for the first time in more than two years.

Then once again, the US Open brought progress to a halt. Ferrero subsequently succumbed to left knee and right wrist surgery and, turning 31 in February last year, he might have called it a day. He decided instead to give it one last shot and reached the quarters in his first tournament in April and won in Stuttgart in July.

But now 32, 2012 proved a mountain to climb: He lost in the first round of his first six tournaments, enjoying a last hurrah in Rome with wins over Kevin Anderson and Gael Monfils—and even the opening set against Roger Federer—before falling to his long-standing Swiss friend. The Spaniard managed just two more wins this year.

This marked the end for Ferrero, as he explained in Valencia:

“I’ve always been a very competitive person and a winner, and I felt like I didn’t have it within me anymore.

“It takes a lot to keep up with what the level is. I could probably still be around for some time, but because I’ve always been a perfectionist, I want to stop now.”

For his elegant style of play, for his competitiveness, for his sportsmanship, and for his personal charm, he will be missed well beyond the confines of his Spanish homeland.