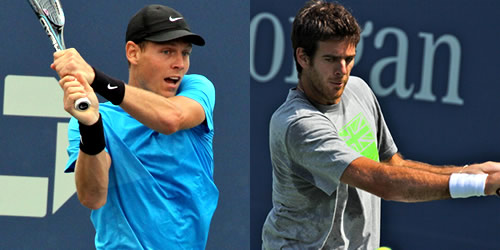 There are only three precious places left on the plane to London for the season-ending climax in 14 days’ time, and the big men of the top-10—No6 Tomas Berydch, No7 Juan Martin del Potro, and No8 Jo-Wilfried Tsonga—have been making sure they get them.

With three finals taking place on a single Sunday afternoon, all three for them were competing for two of the titles.

The Argentine was the first to grab an advantage, taking the Vienna title over little known Grega Zemlja in straight sets. Del Potro, a finalist in Austria last year, did not face a seed throughout the tournament but made headlines in his opener with a record-breaking three-tie-break win over Daniel Brands: It marked the first time two players had both hit 30 or more aces in a best-of-three match since ATP records began in 1991.

Del Potro’s third title of the year may not yet be enough to seal his first berth in London since he was losing finalist to Nikolay Davydenko in 2009, but he is not leaving things to chance. In a month jam-packed with tournaments, he heads straight to the ATP 500 Swiss Indoors, where the main draw begins tomorrow.

What’s more he finds himself as second seed to Roger Federer following the news that Andy Murray had withdrawn at the last moment with back pain.

The Briton’s absence is a blow to Switzerland’s biggest annual sporting event and has not gone without comment on the tournament’s website: “Many people felt that asking for, and promptly receiving, a wildcard into last year’s tournament in Basel and then pulling out again the following year…was not really acceptable.”

It certainly gave the organisers a problem: how to redeem the widely-branded British Day on Tuesday that was to feature Murray.

It also deprived tennis enthusiasts of a possible fifth contest this year between Federer and Murray. With Wimbledon and the Olympic gold split between them, and their last encounter going to Murray just over a week ago in Shanghai, their rivalry is currently poised 10-8 in Murray’s favour.

Looking at the longer picture, it was a pragmatic decision by Murray. Last year, he won three straight tournaments in the Far East and, even though he pulled out of Basel and only reached the quarters at the Paris Masters, he was forced to withdraw with injury after one round robin match at the World Tour Finals.

If he is to finish his current ground-breaking season on a high, he certainly cannot afford to make the same mistake. Novak Djokovic, who is breathing down Federer’s neck in the rankings, and also ran out of steam in London last year, has opted out of match play this week, too.

The Swiss tournament has also lost two other big names. Mardy Fish, a first-time player at the World Tour Finals last year, slipped out of the top 10 earlier this year after treatment for a heart condition, and he has once again been unable to play since pulling out of the US Open.

Also missing is last year’s finalist, Kei Nishikori, ranked 16 after winning the Tokyo title at the start of the month. He picked up an injury in Shanghai last week.

To compound the Swiss woes still further, Federer’s first opponent, Jeremy Chardy, was the top-ranked non-seed in the draw, but he pulled out just a day ahead of his opening match with a neck injury. It seems it never rains but it pours.

However, the silver lining in a sunny and unseasonably warm Basel is that Federer—defending champion and five-time former winner of his home-town trophy—will be hot favourite to make it a sixth in front of his adoring Swiss fans.

By chance, though, Federer could be facing two other finalists from this weekend, the pair who contested the Kremlin Cup in Moscow while del Potro was winning his title in Vienna.

Andreas Seppi will rise to No22 in the rankings after taking his second title of the year against the big-hitting Brazilian left-hander, Thomaz Bellucci. Seppi is the fifth seed in Basel, and scheduled to play Federer in the third round. And Bellucci, who took an impressive first set off Federer in the fourth round of Indian Wells earlier this year, could meet the Swiss in the second round here.

And so to the third, and arguably with biggest, final of the day. Tsonga and Berdych topped the seeds in Stockholm and, for the only the fourth time in their long and successful careers in the top 10 of men’s tennis, they faced one another—only a week after meeting in Shanghai.

On that occasion, Berdych came out the winner but this time, it looked as though Tsonga would take his revenge. The Frenchman seems to thrive on the indoor hard courts: Last year he won in Vienna and then faced Federer in the finals of the Paris Masters and the World Tour Finals. Again this year, he has put together a strong end-of-season run, winning in Metz, reaching the final in Shanghai and then that quarter-final match against Berdych.

Now he is within touching distance of this third successive World Tour Finals. Little wonder he has opted to take this week off while Tsonga—who plays in Valencia—and del Potro take to the courts again in their attempt to shut out the competition for those other two London spots.