Korean Grand Prix 2012: Ferrari's Felipe Massa admits his relief at having found some form towards the end of the season 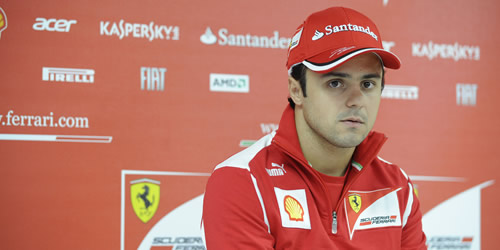 Felipe Massa's Ferrari contract expires at the end of this season Photo: Ferrari

Ferrari’s Felipe Massa admits his recent improved form has been a welcome relief after he claimed fourth place at Sunday’s Korean Grand Prix.

The Brazilian had struggled for much of the season but secured second place at the Japanese Grand Prix and finished fourth in Italy as he gradually crept up the drivers’ standings.

Massa’s fourth-place finish at Yeongnam would seem to have boosted his chances of securing a new contract at Ferrari, with his current deal set to expire at the end of the year.

And the Brazilian, who is now ninth in the standings, admits he felt under pressure as a result of the uncertainty over his future but is determined to end the season on a high and help Fernando Alonso’s bid to win the drivers’ title.

“The whole team is doing its utmost to help Fernando and I am there for him, just as the team is and as it has been for me when I found myself in the same situation,” said Massa.

“In this second part of the season, I have probably understood the best way to drive this car on these tyres: now I’m enjoying myself and it’s a pleasure to make the most of everything I’ve got when sitting in the cockpit.

“Maybe there was also some pressure regarding my future coming into play: but at a certain point I told myself I should not think about it too much any more and probably this approach helped.

“Now I feel stronger and when you enjoy what you are doing, it’s the best. In between here and India there’s a lot of work to do to improve the car, especially for qualifying.

“Let’s hope the updates will give us a little something extra, which could be decisive when it comes to the fight for the title.”