Korean Grand Prix 2012: Fernando Alonso insists he will do all he can to win this year's championship title with four races left 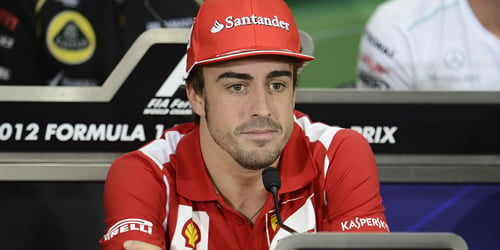 Fernando Alonso has warned Sebastian Vettel that he will fight until the death in his bid to win the championship as the season reaches its climax.

But instead of being downbeat at slipping into second, the Spaniard insisted he was pleased with his third-place finish and vowed to regain his lead.

“We have to be happy with the performance today,” said Alonso. “We finished third and fourth behind the Red Bulls, who are difficult to beat.

“It was a difficult race and, come the end of the weekend, I am happy with the way things went.

“It was a good day for team, for me and for Felipe, and we overtook McLaren in the constructors’ championship so we are definitely moving in the right direction. We just need that last step to be as competitive as Red Bull.

“Vettel’s three wins in a row? Well, he and Red Bull have had three perfect weekends so congratulations for that, but when everything goes smoothly for so long, inevitably sooner or later something has to happen.

“We are right in the fight for the title with a car that has never been the fastest. It seems we are capable of doing something good too.”