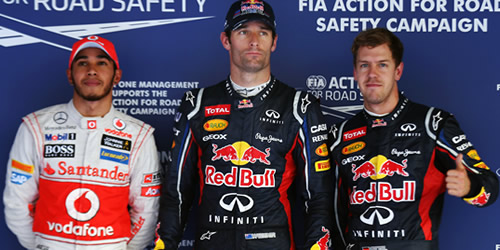 The Australian was 0.074 seconds quicker than the defending champion as McLaren’s Lewis Hamilton took third from Ferrari’s Fernando Alonso.

“It was a tight session for all of us,” said Webber. “I think as the session unfolded, people were having different balance issues on different tyre compounds. I was happy with my lap there, it was solid and it’s good to get pole.

“It’s a great place to start the race from. I’m looking to get off the first corner very well, that’s important as there are two long straights after that.”

Vettel looked set to claim pole as he posted the quickest times in the first and second parts of qualifying but his failure to improve on his final lap allowed Webber to sneak ahead. 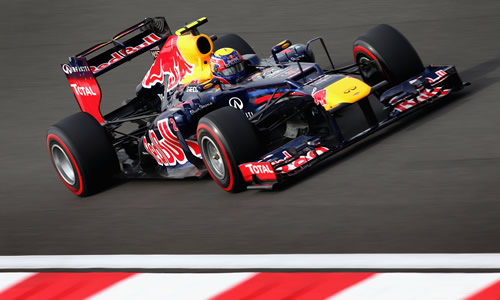 The German was forced to slow down after finding himself behind Ferrari’s Massa, who was about to begin his quick lap.

“Overall we can be very happy with the result,” said Vettel. “We were quite quick in the first and second qualifying sessions and had a good start to Q3.

“Nevertheless, the second lap in Q3 wasn’t good enough. I lost time in the middle sector, which seemed to be okay all weekend, but when the circuit ramped I wasn’t able to go with it, so I lost a bit, but second is a good position so start from. 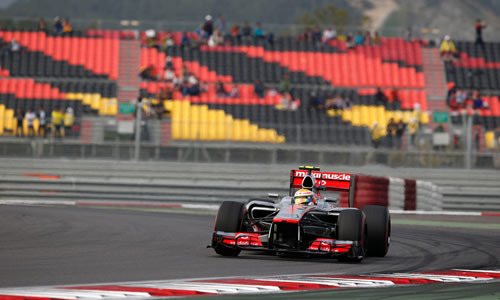 McLaren’s Lewis Hamilton will start from third on the grid (Photo: Vodafone McLaren-Mercedes)

“There are long straights near the start, so it could be interesting tomorrow.”

Hamilton, who was just 0.065 seconds ahead of championship leader Alonso, said: “It’s going to be very tough to get ahead of them but we have put ourselves in as good a position as I could.

“We’re not that far off. Race pace looked quite good yesterday and I’m just happy to have had a good lap.”