Korean Grand Prix 2012: Red Bull's Mark Webber admits his disappointment at not being able to turn pole into victory 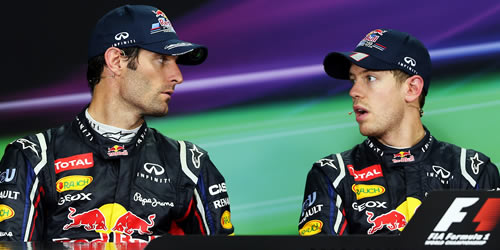 Mark Webber admitted he had “mixed emotions” after finishing second to his Red Bull team-mate Sebastian Vettel at the Korean Grand Prix.

Webber had secured pole position for Sunday’s race but was passed seconds after the start by Vettel, who went on to claim a dominant victory and move to the top of the drivers’ standings with four races left.

The Australian, who is 63 points behind new leader Vettel in the race for the title, reserved praise for his team-mate but expressed his disappointment at not being able to turn pole into victory in Yeongnam.

“I had a bit too much clutch off the line, which was disappointing,” said Webber. “I put up a fight on the back straight with Sebastian, as it wasn’t all over.

“I tried to make a move, but once I pulled out of his slipstream, both of us were on the same speed. After that I was going quite well in the first part of the race.

“I couldn’t use DRS, due to the yellow flags and after that it became a tyre battle. The second stint wasn’t so good, as I went a bit slower to conserve the tyres, but that made the degradation a bit worse.

“The last stint was the strongest, but it was too late by then.

“Congratulations to Sebastian on the win and it’s great for the team that we got a one two, especially for the constructors’ standings, but I have mixed emotions. It was a good result, but of course, I wanted to get the top result today.”