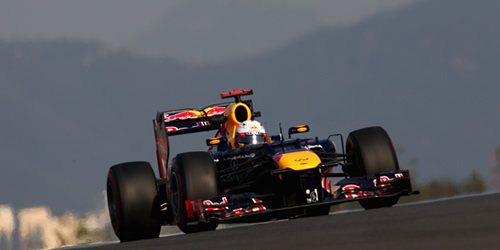 The defending world champion’s time of one minute 38.832 seconds was just 0.032 seconds ahead of Webber, with current championship leader Fernando Alonso 0.328 seconds behind.

“All in all we can be quite happy, but I think it looks extremely tight,” said Vettel. “I’m not happy with every run we had today, but I think the track was changing quite a lot this morning, it was better than we expected.

“This afternoon it was quite slippery to start with, but then I think it got a little bit better so, all in all the car felt alright and now we see what we can do for tomorrow. I think we have to improve ourselves to match the others.”

Hamilton had topped the timesheets in the first practice session in Yeongam but slipped down to eighth in the second.

“For some reason I wasn’t able to get a good time out of the prime or option and even the option I went slower, so I’m not fully understanding that,” said Hamilton.

“P1 was pretty good for us, I was quite comfortable. So I’ve got to try to figure out what was going on.”

Hamilton’s team-mate Button ended up with the fifth-quickest time ahead of Michael Schumacher and Ferrari’s Felipe Massa.

Webber, currently fifth in the drivers’ standings, said: “We had a pretty good program for today and I think both of us managed to get the most out of it.

“We’ll have a look where we can improve tonight in different areas; it’s always a compromise on a track like this with a bit of top speed in the first sector, then the last sector is pretty twisty in terms of rhythm – it’s a bit like Budapest, so you need a bit of downforce there.

“So far so good, we have good information and the guys will now get on with the job tonight.”