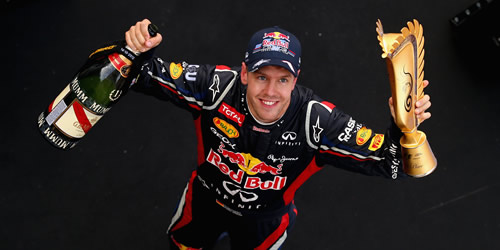 The German driver was only second on the grid for a matter of metres as he moved into the lead on the run down to the first corner and never looked back.

Making it his third consecutive victory, Vettel’s fourth win this season gives him a six-point lead over the Spaniard with four races to go.

“Fantastic. I’m very happy,” said Vettel. “I tried hard to push, Mark was always on my toes. We had two brilliant pit stops.

“The only mistake I had was I locked up the front right on the way in. Fortunately I had a good lead and I could control the gaps. We were a little bit worried about the tyres because there has been a lot of locking.”

“The guys have been flat out, not much break between Japan and here we have done another step on the car, and hopefully we can carry that through to the next races.”

Vettel’s second impressive victory within a week seems to confirm that the team have made a significant step forward with their car and that the German is four races away from a third consecutive title.

The only moment of concern for the team during the race seemed to be over the wear of Vettel’s right-front tyre in the closing laps.

But despite warning him to back off in certain corners, Vettel and Webber both managed their tyres well to secure victory. 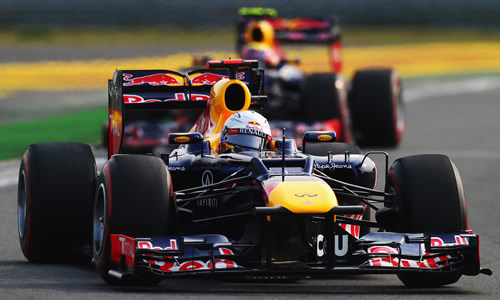 It turned into a race of two teams as Ferrari’s Felipe Massa took fourth place behind his team-mate in the Brazilian’s most competitive performance of the season. Following a run of good results, Massa is expected to be confirmed at the team for 2013 in the forthcoming days.

Team orders were ever present at Ferrari as Massa started to close up on Alonso after their second pit stops and was told by his race engineer Rob Smedley that he was “a little bit too close to Fernando” and to back off.

The strategy later became clear as Alonso had been conserving his tyres for a late assault on the Red Bulls, but they proved untouchable.

Lotus’s Kimi Raikkonen took fifth, keeping him in the hunt for the drivers’ championship, while McLaren’s Lewis Hamilton’s title hopes are now effectively over after he struggled to 10th.

The British driver, who was passed by Alonso on the main straight of the first lap, struggled for grip with high tyre usage caused by a broken rear anti-roll bar on lap 18.

He was the only driver forced to make a third pit stop and it cost him his competitive position, having to defend against the Sauber of Sergio Perez in the final few laps.

In a disappointing day for McLaren, Jenson Button crashed out in the first lap after colliding with Kamui Kobayashi.

Vettel will head to India with a six-point lead over Alonso and 48 points clear of Raikkonen.

With four grands prix remaining there are only a 100 points available, meaning it’s likely to be a two horse race.