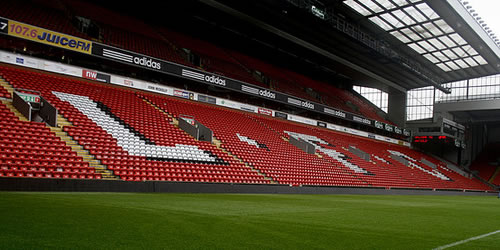 Liverpool plan to increase Anfield's capacity to 60,000 Photo: I Wilson, via Flickr

Ian Ayre has assured Liverpool fans that the club does not intend to sell naming rights to Anfield after the Merseysiders unveiled plans to redevelop the ground on Monday.

The Reds hope to increase the capacity of their historic stadium to around 60,000, with the revamping expected to cost in the region of £150m.

Liverpool were also considering the prospect of building a new stadium – and although Ayre admits naming rights would have been an option with a new ground, the Reds managing director insists the club will not look to rename Anfield.

“There won’t be a naming rights deal for Anfield,” Ayre told the Liverpool Echo. “It was only something we looked at when we were assessing the option of a new stadium.

“Naming rights was a difficult process but we weren’t without our suitors. We have had and still have interest around it. A new stadium would never have happened without it but that was only one part of it.”

Ayre described the plans to redevelop the stadium as a “huge step forward” for the club after the initial proposal was unveiled on Monday.

“Today represents a huge step forward for the Anfield area,” Ayre said. “Everyone at the football club knows the importance.

“There is no question that Anfield is the spiritual home of Liverpool. Any preference we ever had was to stay at Anfield.

“It’s step one, but it’s a major step forward. Questions about capacity and cost are not for today. Not until we have certainty.”